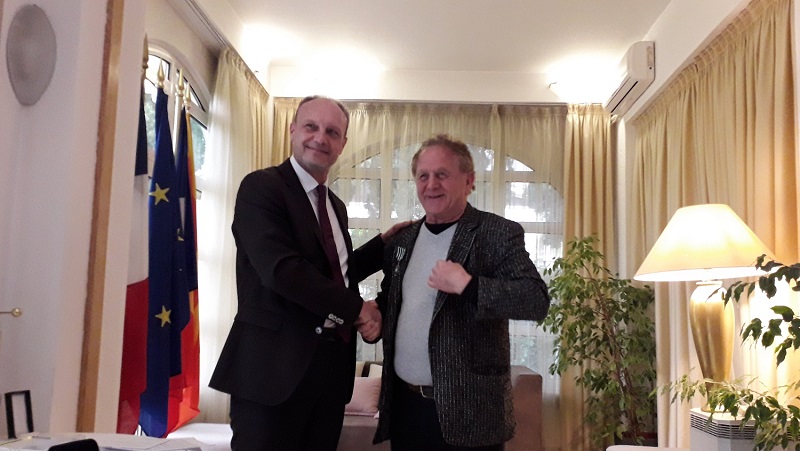 Just before the Easter holidays, the world-famous Macedonian artist Kiro Urdin was awarded the Order of the Knight in the Order of Art and Literature of the French Republic for his contribution to the development of friendship and cultural ties between France and the Republic of Macedonia.

A special ceremony for awarding the decoration was held at the residence of the French Ambassador in Skopje, HE Cyril Bomgartner, who referred to the fruitful and unique creative path of Kiro Urdin. From the beginning when he left for Paris as a non-judicial lawyer with a law degree from the University of Belgrade in the 70s, the city of light and the cradle of art, through working in various areas on all five continents until today, gaining international reputation. Ambassador Bomgartner specifically focused on "planetarism," a movement founded by Urdin.

- Considering that you always look at things in a big way, your most famous work to this day is "Planetarium", an oil painting on canvas that covers an area of ​​48 square meters. It is the first canvas to be worked on worldwide. Your idea was to integrate into one big picture all the spaces you had visited, and in some way to create a work that would be a symbol of the world as an inseparable whole. It took you more than two years to create this great work across 30 areas on all five continents, encompassing large urban and modern centers, down to cultural and historical sites from ancient times, such as the Wailing Wall in Jerusalem or the tomb of Jesus Christ - said among others Bomgartner.

He reminded that a documentary film has been made about the "Planetarium", which follows the creation of this great artistic journey. Directed by Ivan Mitevski, the film won the Best Documentary Award at the 2005 New York Independent Film Festival. The French ambassador also referred to other art forms created by Urdin, such as literature (about 15 collections of aphorisms published), sculpture, photography and philosophy, as well as several documentaries.

- Dear Kiro, you are a link between the cultures of Northern Macedonia and France. You are a great artist, at the same time, as charismatic as you are a great humanist. This world may be a little too narrow for you. You are constantly cruising it, driven by your desire to create bridges between different cultures in order to converge all forms of art. That's also the motto of your Planetarism movement - One point everywhere, all in one point! One art everywhere, all in one art! This award of my country is for a way of life, a work, friendship, but above all, a homage to the great talent that you bring with you - said Ambassador Bomgartner.

- I have two youths. One that I spent in Macedonia, where I was born and my second youth in Paris. My artistic life began in Paris, and what fascinated me and what I learned most was from the culture of the ordinary French man, who has a deep tradition in painting, but also in philosophy and literature. The uncertainty of life is always present, especially for artists, but when there is love for something any obstacle can be overcome.

- Thanks to that French spirit, many intellectuals (Mirро, Picasso, Chagall, Hemingway) who came to Paris had the opportunity to feel that spirit of Paris, which has the sensibility to absorb from its wealth. As time goes on it becomes clearer that there is something most important - and that is art, love, friendship and belief not only in oneself but also in others. I will allow myself to quote Voltaire - I will fight to the last drop of blood for the opinion of others to be different from mine - said Urdin during the act of receiving the order.

He presented his painting of the French residence made especially on the occasion of the awarding of this decoration, called "Red Galaxy".

The Order of the Knight in the Order of Art and Literature is a decoration in France established on May 2, 1957. Awarded by the French Ministry of Culture to persons who have distinguished themselves with their work in art and literature or have contributed to their spread in France and in the world. In the country, holders of this award are the director Teona Mitevska Strugar, the former director of the Macedonian Philharmonic and soloist Maja ќеanaќеevi,, Jordan Plevnesh, Mimi Gjorgovska - Ilievska and the photographer Robert Jankuloski.