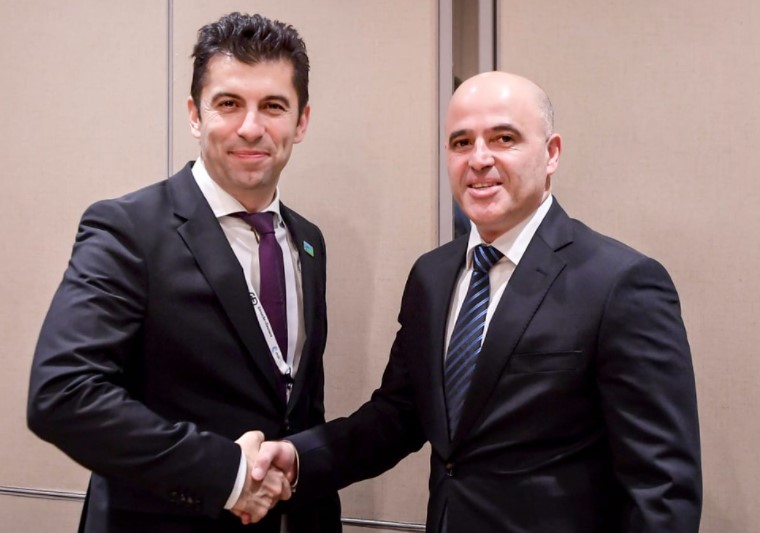 Kovacevski and Petkov in February 2022 / Photo: Government of RSM

The policemen in Skopje achieved everything to protect the state interest, while the Bulgarian Drdorkovians lost everything.

We learned from Skopje that the French proposal has already been modified and the ephemeral guarantees from the original proposal - about historical disputes and language - have already been deleted and suppressed.

They played us for North Macedonia. Expected. We warned them how it would happen - step by step. But our "yes-men" and politically spineless parliament, government and presidency, driven by external interests have become deaf in recent years. They did everything in defense of their interests. While the Bulgarians - Drdorkovci lost everything and thus forgot the memories of thousands who dedicated their lives, desires and powers for Bulgarian freedom and for the liberation of the enslaved Bulgarian Macedonia. The end came, and the Bulgarians remained betrayed, lost and sold.

Everything that was fabricated by Stalinism, Communism, the USSR and the traitors of the BKP - "Macedonian history" and "Macedonian language" - has now become a European norm, legitimate and confirmed by the seal of "vistinksi" in European integration. You explained to yourself how Saint Kliment Ohridski, Tsar Samuel, the Miladinovci brothers or Gotse Delchev are Bulgarians, while Skopje received recognition from Europe and Brussels that they are "Macedonians".

Historical truth, facts and documents are irrelevant, Europe does not understand them and does not want to understand them. Not for another reason, because they do not refer to Alsace and Lorraine, to the Walloon language or to Catalonia. We are simply a second class who should not count on Brussels and its satisfaction of the "upper class" with trivial demands. But don't get me wrong, neither Brussels nor the Western Balkans are to blame, but our "yesmen" politicians who agree on everything.

170 deputies supported the French proposal. They gave the defeated government a mandate to accept the proposal, thus lifting the veto for North Macedonia to start negotiations with the EU. It all happened so quickly, without any detailed analysis or negotiation.

The stupid support that our politicians lied about – we had to kneel down so as not to hand North Macedonia over to Putin's clutches – is nothing more than a trick to fill the heads of geopolitical zealots on social networks.

The truth is that North Macedonia is a member of NATO. So has anyone asked how a member of NATO can be so influenced by the Kremlin, so that without Bulgaria surrendering its national interests, it is not possible to get rid of this malicious influence?

Again, the blame for this lies with the Bulgarian politicians.

In the end, all parties and MPs, Petkov's government and President Radev, all who worked to lift the veto already have a great responsibility before history. And they will cover themselves with eternal shame if they accept the modified French proposal, clearly showing how they are playing with national interests.

Unlike the politicians in Skopje, the Bulgarian politicians are helpless. North Macedonia will continue to move towards the EU with deserved confidence from their protected position.

The text is taken from labor.bg.