Skopje residents enjoy walking in yards with "golden" leaves, but hardly anyone throws them properly 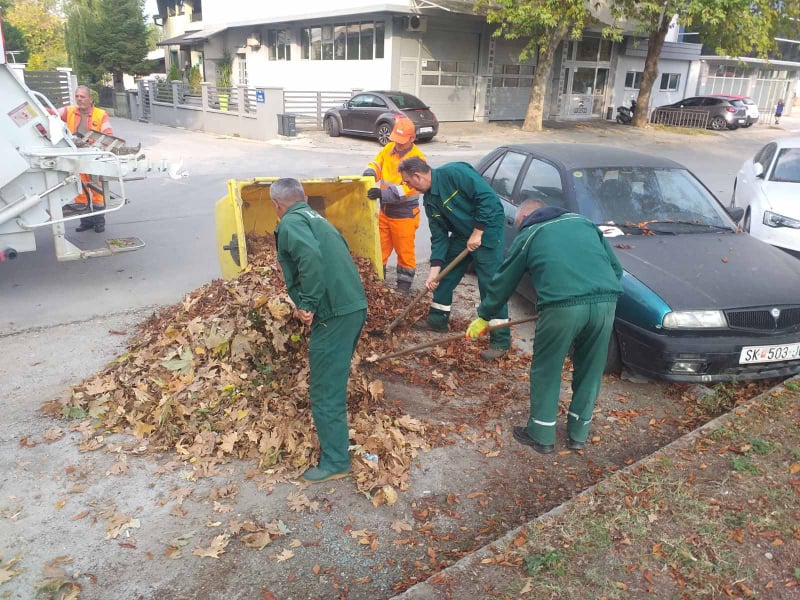 Huge amounts of organic and garden waste regularly at this time of year is a big problem not only for the competent institutions that are responsible for its collection and proper disposal, but also for citizens who have large yards and do not know where and how to dispose of such type of garbage in the months when there is no more fruit or they clean the yard from the blooming flowers and clean the trees and bushes from the dried branches.

It is the lack of information about the method of disposal and treatment of this type of so-called seasonal waste, is the reason for its dumping on public areas and the creation of illegal landfills. Unfortunately, despite the numerous appeals from the City of Skopje and the PE "Communal Hygiene" for proper disposal of this seasonal waste, there are still such citizens who after cleaning their own yard or garden, take the waste to a certain public area where burn it. The damages and consequences of such actions of certain individuals are huge for the air quality, but also due to the pollution of the surrounding area.

However, the officials from the PE "Communal Hygiene" say that fortunately from year to year this occurrence in the field is reduced, compared to previous years and that the awareness of the population for proper classification, storage and disposal of plant waste is constantly increasing.

As a result of the campaigns for raising public awareness about the harmfulness of improper waste treatment, during the past four years we have seen progress in terms of proper disposal of garden waste by citizens - say from this public company.

Therefore, they add that in an attempt to solve this problem, for years, as a public enterprise, they have been appealing to the citizens to store garden waste more conscientiously, because it is about dry trees and branches that due to their condition easily make additional small garbage which is difficult shrinks.

However, apart from garden waste and debris, the authorities also face the problem of collecting fallen leaves from trees, a phenomenon also characteristic of this period of the year. It is the dry leaves, collected by humans, that are an additional problem because they also burn, identical to what happens to other organic waste.

The Public Enterprise "Communal Hygiene" collects this type of waste, but the citizens should store it properly if it is dry leaves or properly arrange it, and then tie it for easier loading. Thus prepared organic waste can be freely placed next to the municipal waste bin and the teams of PE "Communal Hygiene" will thus remove it much faster and easier, and then will properly dispose of it.

- PE "Communal Hygiene" in this period of the year is facing increased amounts of garden waste. We appeal to our customers not to throw this type of waste in containers or on public areas, but to neatly pack it and dispose of it directly next to the placed containers for municipal waste disposal, so that it will be easily picked up and transported by our teams - say from PE "Communal Hygiene".

As a reminder, the citizens of Skopje "produce" more and more quantities of all kinds of waste from year to year. Namely, during 2020, the teams of PE "Communal Hygiene" collected and transported a total of 158.476 tons of municipal waste from households in the urban and rural part of the city. The amount of waste collected in 2020 compared to 2019 has increased by 4.713 tons, or 3,07 percent.

Selected the best catering facilities in Skopje for this year

Bogoevski: Danela will still spend in times of crisis

Skopje will be decorated for the New Year next week

Gerasimovski: For 100 families, 7000 denars of financial aid for newborns

Municipality of Karpos: One-time assistance for people with disabilities