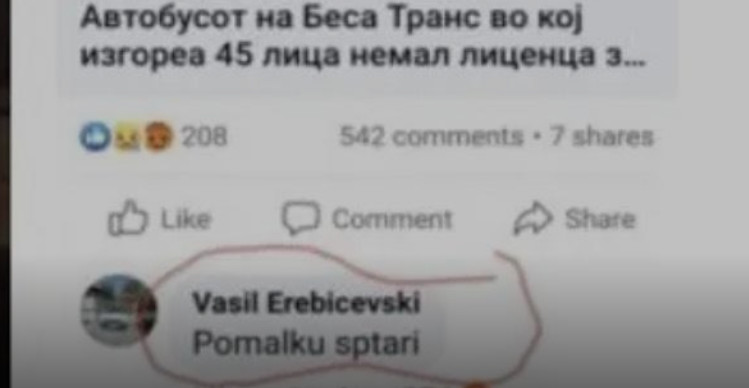 A citizen of Skopje was called to the police station for an informative conversation due to a comment on Facebook with hate speech about the bus accident in which 45 people died.

Namely, after receiving a report for a published comment on the profile of a television company, which refers to the tragic bus accident in which 45 citizens of Macedonia died, the Sector for Computer Crime and Digital Forensics took measures and activities and identified the person behind the written comment. with elements of hate speech, and in cooperation with police officers from the SIA Skopje, it was determined that this person has a place of residence in the area of ​​the SIA Skopje ", said the Ministry of Interior.

The Sector for Computer Crime and Digital Forensics has sent a notification to the Public Prosecutor from the Basic Public Prosecutor's Office in Skopje, and after complete clearing and documentation, an appropriate submission will be submitted.

The Medical Chamber demands that the bullies of doctors be sanctioned

Where did the reduction of the price of PCR tests get stuck, the HIF with its own version

Medziti: I informed Ahmeti that I will not vote for the new government two weeks ago

A day after Petkov's visit to Skopje, Bulgaria closes its borders to Macedonian citizens

Maricic on Macedonian minorities in the region: It is not productive to be in the internal affairs of countries