In a group of Telegram dealers from Serbia offer lottery and delivery: Discount for those who buy drugs from us for the first time 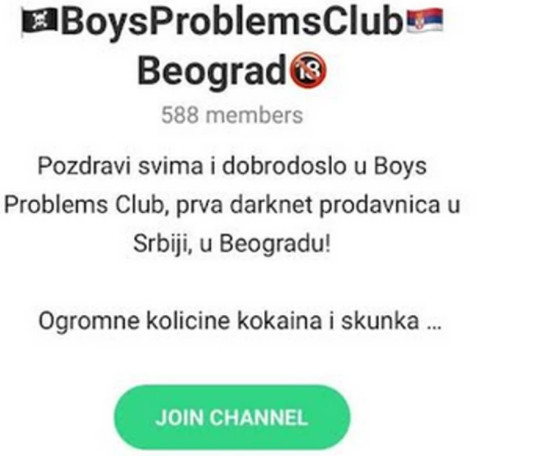 Skunk 3 grams for 27 euros, cocaine 98 percent pure, delivery service on the territory of Stari Grad, Vracar, Zvezdara, is only part of what is in the group "Telegram"Where drugs are advertised and sold.

A new group called "BoysProblemsClubBeograd" has appeared on the Telegram chat network in Serbia, offering drugs for sale. To make the scandal even bigger, an advertisement for that group is posted at the bus station, and it has a code through which it is entered.

The ad says that skunk is offered, then marijuana, cocaine, mushrooms ..

At the very entrance to the group, the Telegram writes that this is the first darknet store and that they work according to the "deaddrop method", which is specific to dark web sales.

The group "Drop Cartel 021" is also circulating on Facebook, which is in charge of selling the territory of Novi Sad.

This second ad explains what dedaddrop means, which is that the drug is hidden in some places, such as under a rock, in a bush, and the client gets the location and goes and picks it up.

Thus, for parts of Belgrade, drug buyers have to pay 4,2 euros, while for cities like Novi Sad and Nis, where dealers go, they have to pay 20 euros for orders larger than 20 grams of narcotics.

This system started with the advent of the dark web, and the police found a way to "break" their security systems.

It is up to the authorities to investigate these Telegram groups.