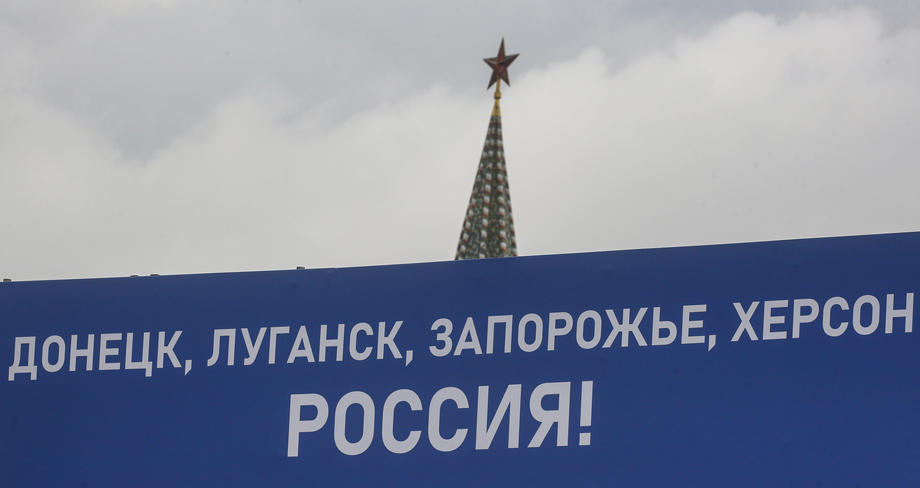 Yesterday, after Russian President Vladimir Putin signed an agreement on the annexation of four Ukrainian regions to Russia, the question was raised:

Who are the millions of Ukrainians living on the other side of the front line and what will change for them?

- For me, borders and state territories are not important, but the fate of people - said Russian President Vladimir Putin in an interview with German Bild in January 2016.

Then it was about the annexation of Crimea.

Now, eight years later, Moscow is threatening to use all kinds of weapons, including nuclear, to protect new parts of the country.

Ukraine and most countries around the world have announced that they do not recognize the annexation, nor the "referendums" that preceded it, in which the majority supposedly voted "yes".

Who are the millions of Ukrainians living on the other side of the front line and what will change for them?

The difference in mood in Donetsk and Kherson

The exact number of people who lived in the occupied territories at the time of the annexation is not known. In any case, we are talking about several million. Although the annexation is simultaneous, the regions are very different.

The rest are mostly old and those who could not leave or who support separatism.

- For some, what they have always wanted will come true. There are always certain parts of the population that cooperate - says Andreas Umland, an expert at the Stockholm Center for East European Studies.

It seems that there are more of them in the east than in the south of Ukraine, but there is no exact data on this. Some in the Donbas supported the annexation, reportedly in part out of fear that they would have to answer in court if the Ukrainian state returned to power, Sergey Harmash says.

- Such people will say that they voted "for", because if Ukraine returns, they will have to flee somewhere, probably to Russia - says Harmash.

No one knows how many such people there are.

As in the occupied territories of Donbass, within six months of the annexation, social changes took place in the south of Ukraine and in parts of Kherson and Zaporozhye regions, although not as fundamental.

Hundreds of thousands of people have fled, but among those who remain are many who continue to support Kyiv. This is shown by the protests with Ukrainian flags that took place in the first weeks and months after the invasion.

- In Kherson and Zaporozhye, many people hate Russia, and in Donetsk and Luhansk, people's heads have been filled with propaganda for eight years - said Harmash.

Unlike Crimea, where two-thirds of ethnic Russians lived at the time of its annexation in 2014, their number in eastern and southern Ukraine is less than half. According to the 2001 census, the percentage of ethnic Russians was highest in Donetsk and Luhansk regions – about 40 percent. In Zaporozhye and Kherson regions there were about 25 and 15 percent, respectively.

At first glance, the formal annexation will not change life much in these areas, which have been under de facto Russian control for the past six months. The experiences in Crimea give an idea of ​​how events can develop.

It will be a mixture of a stick for the dissenters and a carrot for the loyalists. Wages and pensions are likely to increase and Russia will try to rebuild the destroyed infrastructure. The deputy head of the Kremlin administration, Sergey Kiriyenko, presented the exact figures on September 29. According to him, 3,3 billion rubles (about 58 million euros) will be made available for "support projects" in new areas.

Everything related to Ukraine is likely to be increasingly replaced by Russian – laws, currency, telecommunication providers, language, education.

One of the main goals is the return of the cultural Russification of the regions that the Kremlin historically considers its own.

Residents of the annexed regions will have to make a choice: either accept the changes or resist them – risking their lives.

"These are difficult decisions. "Many will be desperate because they cannot predict exactly what will happen next," says Andreas Umland. Because it is not clear how long Russia will stay and how quickly Ukraine can take back those areas. There are already reports of repression, arrests and torture of people who Experiences in Crimea show that the persecution of those who think differently can last for years.

All the men will face a special test as they are likely to be drafted into the war against Ukraine as part of the Russian army. Perhaps, in this way, the Kremlin wants to reduce the risk of a partisan movement - which has so far manifested itself in the south in the form of several attacks on people collaborating with the occupiers.

But Sergey Harmash believes that the Ukrainian secret services are behind it. He does not expect a mass partisan movement like during the Second World War and because of today's technical possibilities for persecution.

- Partisans today and in the Second World War are different things. Today there is video surveillance and telephone surveillance. What we see is the work of organized groups led by the secret services - says Harmash.

Ukrainians in the east and south will be tested in various ways for loyalty, for example by handing out Russian passports. So it was in Crimea and Donbass, where this process started a few years ago. But differences are also possible in relation to the scenario in Crimea.

Observers do not expect a large-scale resettlement from Russia, as happened in Crimea. The reason is the ongoing fight.

- There will be no return of the former residents of Donetsk from Russia, where they are used as workers, especially since there is no work in Donbass. The most important companies were destroyed - says Sergej Harmash.

Will Yanukovych and Azarov return to Donetsk?

It is still an open question who can form a new regional state government. Will local Ukrainians manage the annexed territories or officials sent from Russia?

Until now, the Russians have relied on locals, former members of President Viktor Yanukovych's former pro-Russian Party of Regions, who defected to Russia in 2014.

Will Yanukovych, his Prime Minister Mykola Azarov and other defected representatives of the then Ukrainian elite in Donbas return there now?

Experts do not rule it out, but do not believe that these people will return to power. In the meantime, new elites were formed that do not want to retreat, Harmash believes.

Perhaps the leadership of the region will be transferred from the Ukrainians to officials from Russia. The Russian press has already described such developments. At some levels this process has even begun.

Uncleaned chimneys are the cause of fires, 25 chimney sweeps were trained, at the last call only six reported