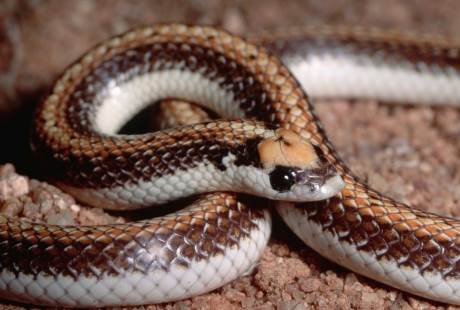 Snakes attack people out of fear, and only if you step on them. Snakes are also very dangerous in the mating season or while nursing a young, but even then, if you retreat without sudden movements, it will not attack. If the snake is stepped on, it will instinctively turn around and bite your leg. Venomous snakes hardly differ in speed from non-venomous ones, but the main thing is that venomous snakes have a distinctly triangular head (in non-venomous snakes it is more ovoid) and a very narrow neck, while in non-venomous snakes this is not the case.

There are several types of snakes living in our area, three of which are poisonous – the snake, the snake, and the sharp-headed snake, while the rest are harmless. These three venomous snakes are less venomous than African or Asian snakes such as the cobra or black mamba, so their bite is rarely fatal. The possum is more poisonous than the others.

Venomous snakes have one to two hollow fangs bound by a sac full of venom. That poison is secreted by a gland connected to the sac. As soon as the snake sinks its teeth into the victim's flesh, a certain amount of venom is released from the sac into the wound.

In snake venom, there are actually two types of venom. One acts destructively on the nervous system, heat does not destroy it, the other acts on the blood and bleeding.
There are people who are resistant to snake venom (immunity). Some are born with this resistance, and others acquire it by being bitten by a snake with a milder venom or by being given an anti-serum from a snakebite.

How to recognize a wound

At the site of the bite, two small puncture wounds from the snake's teeth can be seen that do not bleed. Sometimes there is only one. It does not always mean that the snake left poison in the wound. In as many as 22 percent of the proven wounds, there were no signs of poisoning. Soon a red ring appears in that place, which turns blue, that is, the wound turns blue and swelling occurs. Somewhat later, stiffness occurs on that part of the body. Once it enters the blood, the poison spreads throughout the body.

A person who is poisoned also feels weak and develops fever, tremors, dizziness, his pulse accelerates and breathing becomes more difficult, pallor occurs, partial or complete kidney failure may occur. Blood can stop clotting, the bitten person often vomits and has diarrhea, loses consciousness. Later, convulsions and complete insensitivity (coma) occur. Delirium, confusion, and convulsions herald intracranial hemorrhage, which is often the immediate cause of death.
If you do not react in time, paralysis of the breathing center occurs, and soon after, the heart stops working.

The site of the sting is very important for the development of symptoms. The most dangerous snake bites are those on the head or neck, or if the snake injected the venom directly into a blood vessel.

Don't panic, because there is plenty of time (and more hours) to get to the doctor. There is no general agreement regarding treatment. All agree that absolute rest is necessary, because movement accelerates blood circulation and absorption of poison. Some doctors do not recommend dressing the area above the sting, applying ice is prohibited due to increased necrosis (tissue death), incision (incision) of the wound and extraction of the contents is prohibited. Immobilization and immediate transport to a facility where the person can receive antivenom is recommended.
Most doctors have almost the opposite opinion and suggest the following procedures: the bitten limb should be tied, moderately tightened with a bandage immediately above the bite site, and immobilized. Occasionally (3-5 minutes) loosen the bandage, because the blood must circulate through the poisoned part of the body, that is, from the veins to the heart. At the site of the sting, make two cross cuts (the letter X) at a depth of 3-4 mm, and let the wound bleed. That way, most of the poison will come out with the blood. Sucking (sucking) the wound with the mouth is not recommended at all, because even the smallest wound on the mouth or in the oral cavity, as well as a rotten tooth, is enough to poison the one who tries to help. Cuts are made with knives, razors or other sharp objects whose blade has been burned with a flame or wiped with alcohol. The third thing to be done in a snakebite is that an intensive solution of hypermanganese should be applied to the wound and, if possible, a one per cent solution of hypermanganese should be injected all around the wound. The bitten person should be given as much fluids as possible, but no alcohol. He should then be transported to the nearest medical facility where he will receive anti-snake bite serum.

Antiviperinum serum should be given as soon as possible (intravenously or intramuscularly), according to the protocol with hypersensitivity testing. Antiviperinum serum is effective against semi-venomous and venomous snakes occurring in Europe.

To children with allergic diseases or reactions, when the data in the personal family anamnesis is obtained, it is desirable to give the antiviperinum serum in hospital conditions, intramuscularly and with caution.

A microbiological swab should be taken from the wound, and then rinsed with an antiseptic agent.
In all cases, it is necessary to check and implement anti-tetanus protection and give antibiotics that cover the Gram-negative and anaerobic flora that dominate the snake's mouth.

It is necessary to eliminate the pain by giving analgesics. In the case of pronounced hemolysis, transfusion with concentrated erythrocytes should be given, and in the case of disseminated intravascular coagulation - plasma.

It is necessary to maintain diuresis and prevent or treat shock. Surgical treatment is necessary when tissue necrosis occurs. In the case of a large swelling that disturbs the arterial circulation of the limbs, an urgent fasciotomy is indicated.

The most common mistakes you should not make

– Do not bandage the limb.
– Do not touch the wound.
– Do not try to remove the poison.
– Do not put ice on the wound site.

Some wounds, such as when you accidentally step on a snake, are almost impossible to prevent. However, there are precautions that can greatly reduce the chance of being bitten by a snake.

• Leave the snake alone. Many people, when bitten, try to harm the snake.

• Avoid tall grass if you do not have appropriate clothing.

• Do not put your hands and feet in unobservable places.

• Do not pick up rocks or pieces of wood unless you are far enough away from a potential snake attack. Be especially careful if you are climbing rocks.