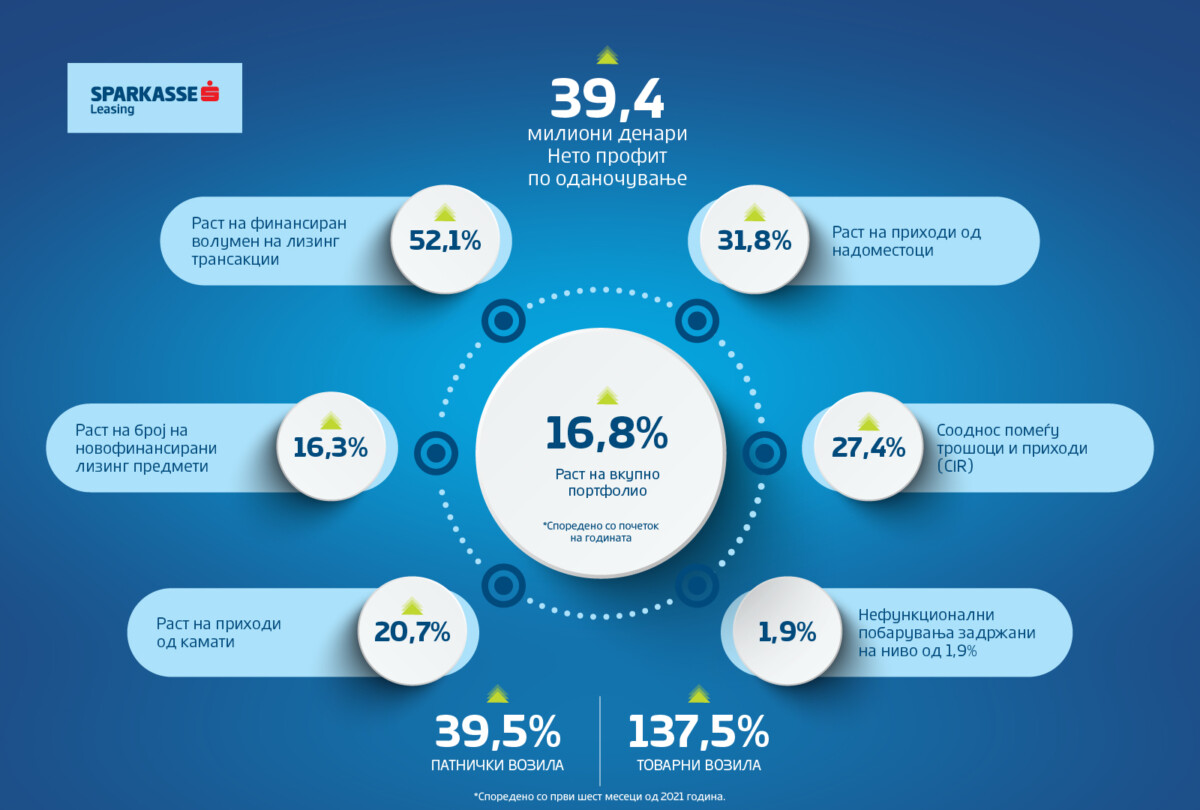 Based on the unaudited financial reports for the first six months of 2022, Sparkase Leasing Doo Skopje achieved strong performance in all segments of operations, which contributed to the growth of the total portfolio by 16,8% compared to the beginning of the year, as well as:

• Growth of the financed volume of leasing transactions of 52,1%;
• Growth in the number of newly financed leasing objects of 16,3%;

During the first half of 2022 Sparkase Leasing Doo Skopje recorded strong growth in all segments of operations, although the impact of increased vehicle delivery deadlines as a result of supply chain disruptions and increased prices was significantly felt on the market.

Despite global vehicle delivery problems that slowed the European market by 14%, the new car market in the Republic of Macedonia for the first six months recorded a growth of 13% compared to the first six months of 2021, thanks to good sales in June which was previously due to deliveries to car rental companies.

Šparkase Leasing D.O.O. Skopje, with its appropriate positioning in the market and offer of flexible products and services, saw an increase in the financed volume of leasing transactions by 52,1% and an increase in the number of newly financed objects by 16,3% compared to the first six months of 2021 year, which confirmed its role as a market leader.

It is significant to note that excellent growth was achieved in the two "core" segments in the operation, passenger vehicles and heavy goods vehicles with a growth of 39,5% and 137,5% respectively, compared to the first half of 2021.

Interest income increased by 20,7%, with fee income growing by 31,8%, with impairment charges remaining below budgeted levels thanks to a stable and healthy portfolio. As a result of these movements, the net profit after taxation for the first six months of 2022 amounted to MKD 39,4 million.

The second half of 2022 is expected to be filled with challenges, primarily from the aspect of the previously mentioned disruptions in supply chains, the reduced supply of vehicles as well as the growing inflation, and the more evident upward movements of the interest rates of the European, and therefore the Macedonian financial market.

Sparkase Leasing continues to strongly support the Macedonian economy and business, while in the next period we will focus on introducing new products and services as well as further speeding up the procedure for the implementation of new contracts with the aim of approval and implementation within 24 hours from the moment of application. , pointed out Marjan Manchev, Executive Director of Sparkase Leasing Ltd. Skopje.

After IVZ, Bekteshi asked the MOC to save electricity