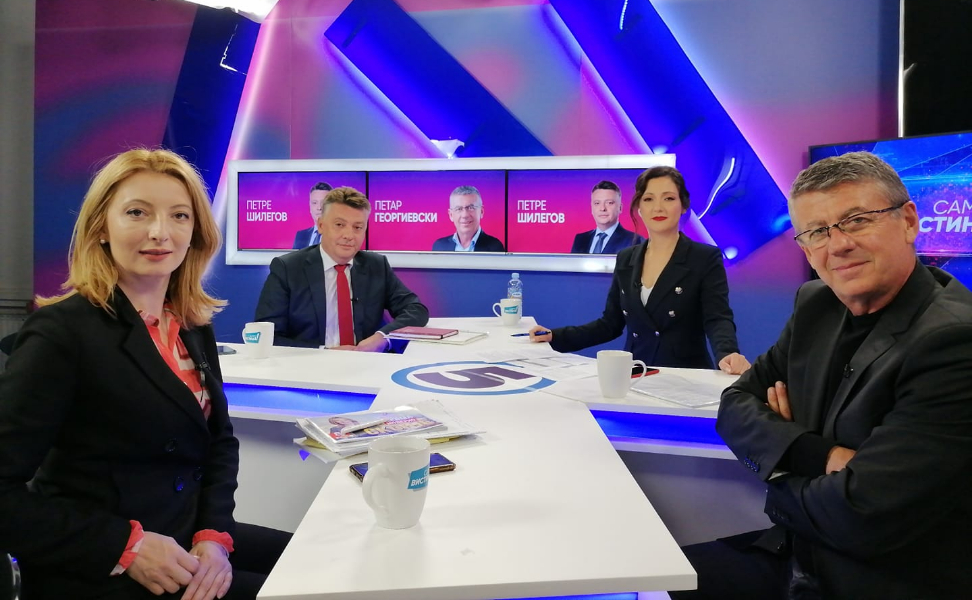 The final confrontation between some of the candidates for mayor of Skopje on Kanal 5 television tonight offered much more quarrels and personal insults, than a substantial discussion about the development of the capital in the next four years.

Candidates supported by SDSM and VMRO-DPMNE, Petre Shilegov и Danela Arsovska, at the very beginning of the debate, they got into an argument about who ran what campaign and who had what competencies to manage the City, and the tone and atmosphere remained similar until the end of the show. The candidate of the Left also took part in the debate, Petar Georgievski - Kamikaze, who tried to use the narrow space for his arguments and questions to Shilegov.

The current mayor first accused Arsovska of manipulating the citizens because she presents herself as independent, and in fact is a candidate of VMRO-DPMNE.

"You are a candidate of VMRO-DPMNE, you are trying to manipulate the citizens. 135.000 euros were paid by members of VMRO-DPMNE. Auto service from Probistip, people from Pehchevo, Veljusha, added Shilegov, referring to the Strumica village Veljusa and presenting an official document on who is financing the campaign of his opponent.

Arsovska responds with counter-accusation for the "black campaign" led by Shilegov and asked him to apologize, among other things, for the fact that he posted the insults and false claims about her through his official, mayoral profile on Facebook.

"I think that all citizens, and we Skopjans are tired of politicians, I believe that people are aware that we have nothing from empty promises in the past four years. "We have a realization of something that is in progress in 2017-2021, and when you say in progress it does not mean that you have realized, it means something you want to show people that you have started," she said.

Shilegov also said that Arsovska is not ready for the position it aspires to, because, according to him, she has no knowledge of basic matters related to the functioning of the city administration and the competencies of the City. The candidate supported by VMRO-DPMNE replied that Shilegov has "no domestic or political culture". Arsovska called him "the outgoing mayor", which offended Shilegov, who asked if it was okay for him to call her "a candidate for mayor in a failed attempt".

Georgievski announced that the first thing he will do if he sits in the mayor's chair is the revision of the project for buildings in the parking lot at the Holiday Inn Hotel, as well as the construction of a botanical garden in Rasadnik, "the last free zone in Skopje, where they will not be able to to build buildings like at the Holiday Inn. "

VIDEO | Stojkoski: We will sanction all those who throw garbage in the cleaned landfill

VIDEO | Architect Pavlovska: Violence from the capital, with a vulgar profit, is not a way for a quality urban solution

Janceva: We have submitted an initiative for an extraordinary session of the Council of the City of Skopje to help the victims of the accident in Bulgaria

Tomorrow without water the users of part of the streets "Maksim Gorki", "Mito Hadzivasilev Jasmin" and "Lermontova"

The company "U Power", whose owner attacked Bislimoski, terminated the contract with the City of Skopje

Bus number 3B has been transporting passengers with cracked glass for days, JSP promises quick repair

VIDEO | Ganiu: The people of Cair do not want to celebrate the New Year, 16 of our neighbors died