22:50 The Pope called for the establishment of humanitarian corridors in Myanmar

VIDEO | Shilegov: BRT will completely transform the public transport in Skopje, the existing bus lines will be abolished

Many reactions and grievances arose after last month the Mayor of the City of Skopje, Petre Shilegov, presented the project for fast bus transport BRT in the capital. The citizens were left without enough details to put together the mosaic for this massive project that the City will cost 70 million euros, a loan from the EBRD, which has already been signed and will be realized in two tranches.

It is known that BRT will cover two lines with corridors reserved only for ultra-ecological buses - from Gjorce Petrov to Novo Lisice, and from Butel to Kisela Voda. The route with west-east direction is 12,8 km in one direction, with 21 stations, and the route with north-south direction is 10,4 km and 20 bus stops.

The new city high-speed transport abolishes all existing bus lines and envisages the establishment of new regional roundabout bus lines, which aim to bring passengers to a BRT stop, from where they will continue their journey in the desired direction.

- The public transport in the City of Skopje will be completely changed. The existing bus lines will be gone. When you have BRT, you will not actually need 5, 15 because the bus will move in that direction. All other bus lines will spin in a circle. There are reactions why BRT does not go to the Municipality of Saraj, and that is because we do not have the infrastructure there to support the system, but there will be a bus that will run all the time from the Municipality of Saraj to Gjorce Petrov where it will unload passengers to board on BRT. Or, for example, Kozle, there will be a bus that will unload the passengers on Partizanska and back, it will actually turn in a circle and the citizens will have a quick way to get to BRT, which will then take them to the other destinations they have or such a line can be established from Novo Lisice to Avtokomanda. The whole system will absolutely change - says the mayor of the City of Skopje, Petre Shilegov.

On the route from which Novo Lisice to Gjorce Petrov will operate BRT, new bus stops will be built, a total of 21 and will be closed, which will not be able to enter if the ticket is not validated.

- It means that there will be no smuggling and all stops will be near the pedestrian crossing, so that passengers will have safe access to the buses. The doors will open the moment the vehicle arrives - explains Shilegov, adding that at the Railway Station, the platforms will have a warm connection with the BRT station, which means that passengers who arrived by train in Skopje will be able to board a bus without being exposed to external weather conditions.

What makes BRT transport fast is of course the digital signalization, which is already being introduced in Skopje through the "Smart City" project and that means that these buses will have an advantage over other vehicles in traffic.

- The entire signalization of the intersections, considering that it is a seriously digital system, will be dedicated to BRT. When the BRT vehicles arrive, there is a digital announcement and the switching on and off of the signals will be in the function of BRT which will be able to pass while the others are at the intersection - says Shilegov.

He explained that according to the whole project, the Small Ring or the street from the Assembly of RSM to Paloma Bjanka will be turned into a pedestrian zone where only BRT will operate, as well as ambulances and fire and residents of nearby buildings in the center will have the opportunity to get in and out of their buildings by car.

As a point of contention that will need to be further regulated is the part of the City Hospital, but there are solutions that are within the project.

The connection of Partizanska from the center of Skopje is through the boulevard VMRO from where BRT will continue to drive until the end of Partizanski odredi after which after the roundabout at Porta Vlae the bus arrives at the last station - the depot of JSP.

Bus instead of tram

With the Mayor Petre Shilegov around 12 noon we traveled the route from Novo Lisice to Gjorce Petrov by car in about 40 minutes, and when BRT starts operating at the end of 2023, this ride will last about 35 minutes.

- On this route it is planned to operate 13 buses of combined technology natural gas and electricity as well as another 13 on the line from Kisela Voda to Butel which will intersect at the intersection at Vero Jumbo - explained Shilegov.

With the EBRD loan of 70 million euros intended for BRT-transport in Skopje, the procurement of CNG hybrid buses is envisaged.

-Currently, the technology of electric buses is not so developed that we can base the entire public transport on them. The problem with the electric buses is that at one point, especially in the evening when there is no transport, you will need to connect all the buses from the JSP fleet, about 300 to electricity and for that we will need about 18-20 million euros to make a new transformer. There is no such capacity now - Shilegov is decisive. 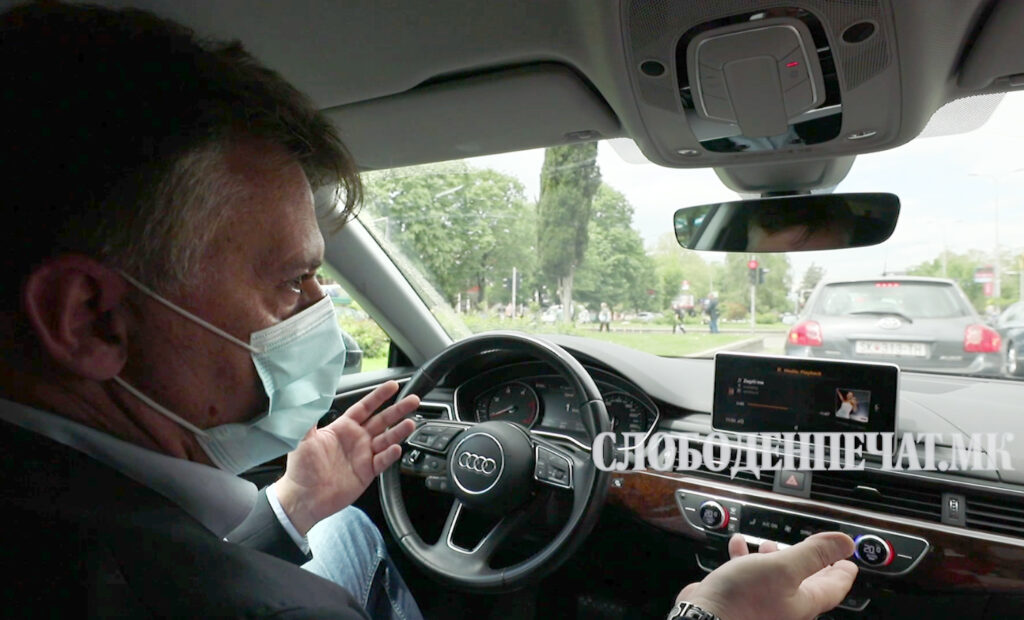 Shilegov announces ecological, safe city transport, without traffic jams and destruction of existing greenery in the plantersAccording to him, the project has been worked on for more than 2,5 years by the city services, experts hired by the City as well as experts - consultants from the EBRD which is a partner bank of the City in the whole project and which supports environmental projects such as this .

- The route of BRT is not something that I invented as a mayor or one of my predecessors. It is the same route provided in the urban planning of our city and on which a tram should or should move. BRT is a tram substitution. Modern non-rail cities have BRT. It is a very environmentally friendly transport. BRT on this line from Novo Lisice to Gjorce as a project costs 40 million euros, and if it was a tram it would be 150 million euros. The entire system now costs 70 million euros - if it enters a tram solution would cost 380 million euros - claims the mayor of Skopje, who expects from the citizens to get a second term in which the complete modern solution for public transport will be seen in action.

He stressed once again that the whole project is not to the detriment of the greenery in the existing planters on the boulevards Jane Sandanski and Partizanski Odredi where BRT mainly operates and already at the end of the month or in early June the EBRD experts will announce all the details of the project. which will completely change the face of the city.

One ticket for the entire public transport system

Given that some citizens will have to use two buses, instead of one as they have used so far for certain destinations in the city, the mayor assures that it will be regulated with the same ticket that will apply to both rides - both roundabout and BRT .

-Ticketing or map politics is a special science that is applied in the world in terms of offering more options. Driving globally on BRT or because of BRT will not be a reason to increase the ticket price. One card validation applies to the entire public transport system. If you go to Kozle and validate the map there at the entrance to BRT you will not do it again because the system remains integral for all public transport - says Shilegov with whom we drove on the route along which the BRT line will run from Novo Lisice to Gjorce Petrov.

5 suspects in the murder of the American in Belgrade interrogated: He was beaten, hit with a metal scale and an ax

Ngolo Kante, the most modest football player in the world who is ashamed to take a picture with the championship cup

The Pope called for the establishment of humanitarian corridors in Myanmar

Palichko Lake tragedy: A man drowned, his body has not been found yet

The fire was localized near "Sloboda", no one was injured

VIDEO: They have a goal difference of 32: 0, when was the last time Italy's net shook?

Organize your home: Be sure to get rid of things you do not use

The Pope called for the establishment of humanitarian corridors in Myanmar

Tragedy on Palichko Lake: A man drowned, his body is still not ...

The fire was localized near "Sloboda", no one was injured

PHOTO | Iskra Doneva's illness is not an obstacle for her normal ...

The settlement of Jaka was left without sewerage and muddy streets

Meet Alex, the boy who conquers the people of Skopje with a smile and their ...

Do you know why UEFA called Pandev a "centurion" and included him among ...

PHOTO | On the slopes below Jakupica with Tanja Blagojevic: I chose to be ...

Biden, Putin and the new era of information warfare

We do not need G7

What can be learned from a survey?