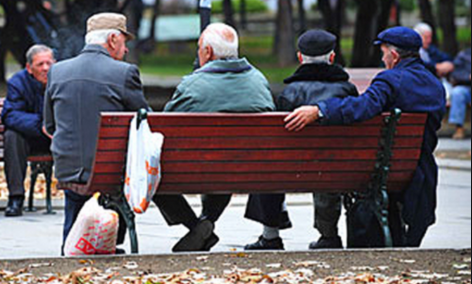 Changing the formula for harmonizing pensions and setting a target for a minimum pension is proposed by university professor Jadranka Mrшиiќ.

The lowest pensions, depending on the year of retirement, range from 9.986 to 12.800 denars, and they are taken by as many as 80.809 pensioners, ie every fourth pensioner. The increase of the minimum pensions with the January indexation with the cost of living of 2,9 percent, will bring these pensioners an average of 304 denars. However, it will bring 57.992 denars to those with the highest pension of 63 denars (there are 1.682 pensioners).

The pensioners reacted violently on social networks saying that with an increase in pensions by 300-400 denars, their standard will not improve at all, that they live miserably and that it is necessary to correct the lowest pensions. The Party of Pensioners has repeatedly emphasized that the pension standard is very low and that something must be done. They informed that they are in negotiations with the Government regarding the change of the formula according to which the harmonization of pensions is performed. Under current regulations, pensions are adjusted for inflation in January and July, and the party wants that to be the case with wage increases. They also pointed out that they are in negotiations to have an additional increase in pensions in the near future, and such a promise was given by the Prime Minister Dimitar Kovacevski.

Is there a cure for the low pension standard, we talked to university professor Jadranka Mrшиi., which also considers it necessary to change the formula for adjusting pensions, but also to have gradual increases only on the lowest pensions.

- We had the Swiss formula for adjusting pensions, where 50 percent adjusted to the growth of retail prices and 50 percent to the growth of the average wage, but then all that changed and now the adjustment is only to the growth of prices. I think it is fairer for pensions to grow in correlation with the average salary. By adjusting pensions to inflation, they get virtually nothing, only regaining the value of a pension that has declined with rising prices. Average wages in the pandemic also grew by high percentages, and if pensions are not adjusted to wages, what was initially achieved by retirees is devalued. "Replacement rates are reduced anyway, so that they are not devalued further by the adjustment method," Mr Мi вели said.

She explains that the current trend in Europe of long-term pension policy makers is to turn to pension adequacy, unlike in the past when they turned to the sustainability of the pension system.

- During the pandemic we could see that in other countries there was a one-time assistance for retirees. Of course, it depends on the power of the state - says Mrшиi..

The data from the Pension and Disability Insurance Fund show that in the worst position are those pensioners who exercised their right to a pension from 1997 to 2002. Their minimum pension is 9.986 denars and it is taken by 3.185 pensioners. The minimum pension for those who exercised the right from January 1, 2002 is 10.487 denars and 42.993 pensioners have such a pension, and those who retired until 31.12.1996 have the best pension, for them the minimum is 12.222 denars and belongs to 6.778 pensioners.

Angelovska-Bezoska: We expect interest rates to go up, attempts are being made to moderate it