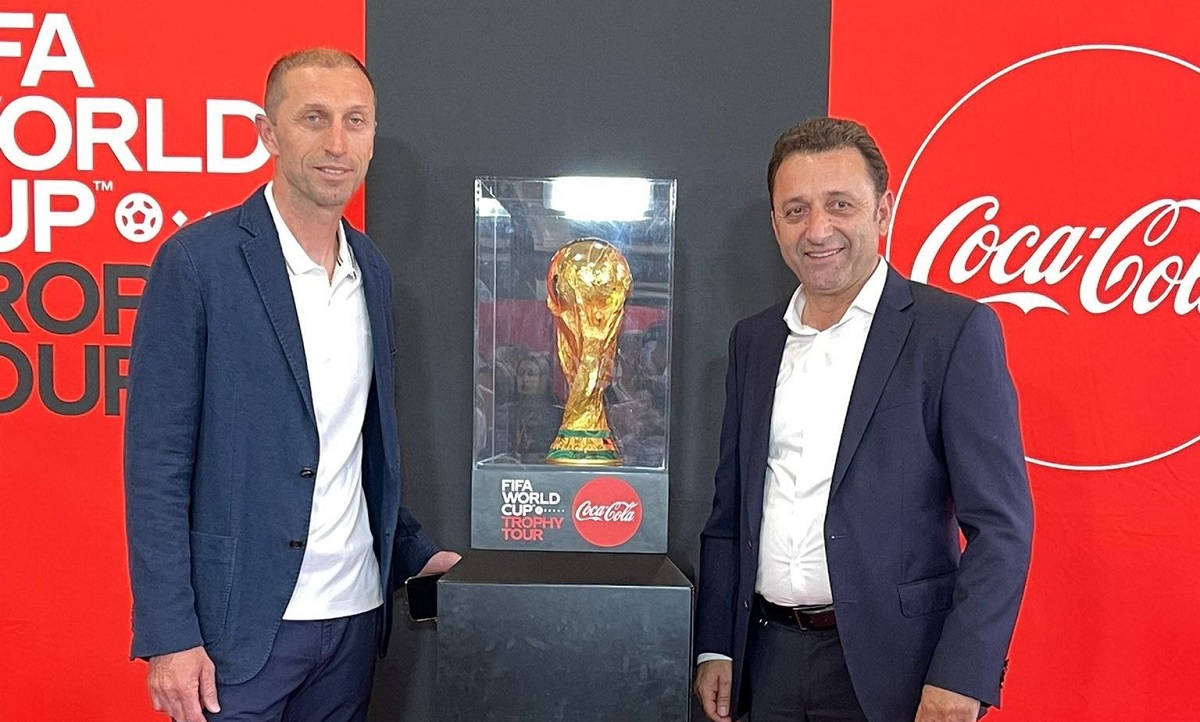 The selector of the seniors Blagoja Milevski and the president of FFM Muamed Sejdini with the golden cup / Photo: FFM

Today Skopje is the center of the football world and the home of the original FIFA World Cup trophy. The original symbol of football magic made of pure gold that brings excitement all over the world, finally, is in our country.

The trophy arrived in the capital as part of the FIFA World Cup trophy tour organized by Coca-Cola. The golden symbol of world football unity arrived together with the ambassador of the trophy tour, the Brazilian football icon Gilberto Silva.

Home of the original FIFA World Cup trophy was Pivara Skopje, the official representative of The Coca-Cola Company in our country. The trophy was unveiled at a historic moment by Stevo Pendarovski - President of the Republic of Northern Macedonia and football legend Gilberto Silva, in the presence of Lambro Patche - Director of Corporate Policy and Sustainability, Muammed Sejdini - President of FFM, General Luca Santander of the Coca-Cola Company, as well as in the presence of media representatives from across the country.

- The original trophy of the FIFA World Cup is one of the greatest symbols in the sport. Skopje and Macedonia, thanks to FIFA and Coca-Cola, have a unique opportunity to be part of the magic of the World Cup and at least once in their lives to see the original trophy and taste the excitement. Football has the power to inspire and connect people, overcoming barriers as fans share moments of excitement and joy.

I am especially glad that the Macedonian national team had an incredible football experience and was very close to qualifying for the World Cup in Qatar. We will remember the moments of football euphoria in our country for a lifetime, and let this be just an incentive to try in the next cycle to secure a place in the World Cup and to really fight for this trophy - said Sejdini, president of the Football Federation of Macedonia.

Reminder that the World Cup in 2026 will be organized in three countries, USA, Canada and Mexico.

The World Cup trophy has arrived in Skopje

This year's FIFA World Cup ™ trophy tour organized by Coca-Cola has traveled more than 750.000 kilometers so far and is part of the campaign for the FIFA World Cup to be held in Qatar in 2022. This year's global trophy tour will travel to 51 countries, including our capital - Skopje, enabling Macedonian football fans to enjoy the magic of football.