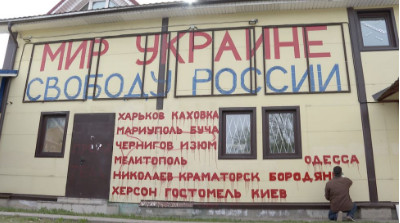 If you drive eight hours north of Moscow, you will reach a small town called Russian-Visockoye.

There is not much to see here except the chicken farm and the church that was turned into ruins in World War II.

But there is one thing in this city that is particularly appealing: the local mall.

Dmitry Skurikhin owns the building - and you should see what he did in front of it.

He wrote in huge letters "Peace for Ukraine, freedom for Russia!" In bright red, he listed the names of Ukrainian cities that had been attacked by the Russian army.

Mariupol, Bucha, Kherson, Chernihiv and many others are among the cities he wrote.

"I thought this would be a good way to get information out," Dmitry told me.

"Because the first few weeks of the war our people did not know what was happening. They thought that a special operation was being carried out by the Ukrainian government to remove drug addicts. "They did not know that Russia was shelling Ukrainian cities."

Dmitry even turned the roof of his shop into a giant yellow-blue Ukrainian flag.

Dmitry knows that what he is doing is quite risky. In Russia, public protests often end in persecution or threats. Someone had already painted "traitor" graffiti on his door. Police have already visited him several times. He was later punished for discrediting the Russian armed forces.

"I could not just sit and do nothing. That would tear me apart inside. But what I am doing is an act of despair. Now the Russians are rejected. We deserve to be. "This offensive will cast a shadow over us for a long time."

The Kremlin wants to portray President Vladimir Putin as a leader backed by his people. Authorities insist the Russians support him in Ukraine. Dmitry claims that it is an illusion.

"If you ask people here if they are for a war between Russia and Ukraine, by shelling cities, plus all the consequences like poverty and hunger, they will say, 'Are you crazy ?!'" Dmitry said.

"The Russians are exposed to misinformation. They support the special military operation that is being talked about on television. "But people are beginning to realize that what is really happening is a disaster."

But Dmitry Skurikhin knows that color will not bring peace.

But if his protest makes people in the city stop, think, even doubt, then - he believes - this will be worth it.