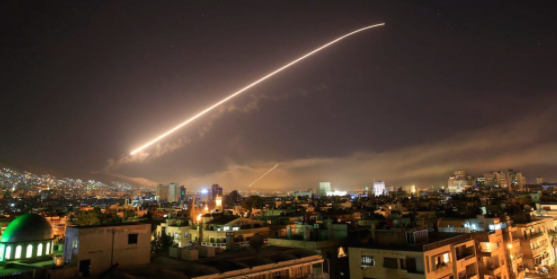 Moscow condemned a weekend airstrike attributed to the Israeli armed forces on targets near a Russian naval base in Syria, calling such activities "categorically unacceptable" and calling for them to stop.

"We strongly condemn such irresponsible actions that violate the sovereignty of Syria and the basic norms of international law and demand that they stop unconditionally," said the spokeswoman of the Russian MFA, Maria Zakharova.

Saturday's attacks targeted an area near the Syrian town of al-Hamija, south of Tartus, where the main Russian naval base in the region is located.

Two civilians were wounded in the attack and considerable material damage was caused, Moscow said.

Syria also blamed Israel for the attack, and the Israeli army did not respond to the accusations in line with its practice of not commenting on military interventions in the neighboring country.

Israel has carried out a hundred or more attacks on targets in Syria, but rarely claims responsibility for them.

Israeli leaders have previously indicated that the targets of the attacks are the bases of pro-Iranian militias such as the extremist Hezbollah, whose members fight alongside the forces of President Bashar al-Assad, as well as arms shipments to Iran's allies in the region.

The UK-based opposition Syrian Observatory for Human Rights said the target of Saturday's attack was weapons intended for Hezbollah, but this has not been confirmed by any other organization.

The Israeli army mainly carries out its attacks at night, but this time the attack was carried out around 6:30 a.m. on a poultry farm. Syrian authorities often point out that the targets of the attacks are not military targets at all.

Israeli attacks in Syrian airspace continue even though the skies above the country are largely under the control of the Russian Air Force. Relations between Israel and Russia have worsened in recent months, since Tel Aviv increasingly supports the Ukrainian side in the war with Russia, and tries to maintain freedom of movement in the space over Syria.

Russia has previously strongly condemned Israel for the June 10 attack on Damascus International Airport, which was also attributed to the Israeli army. Due to the damage caused, the airport was closed for air traffic for two weeks.

China has tested a weather-altering drone

The EU is concerned about Turkey's growing trade volume with Russia