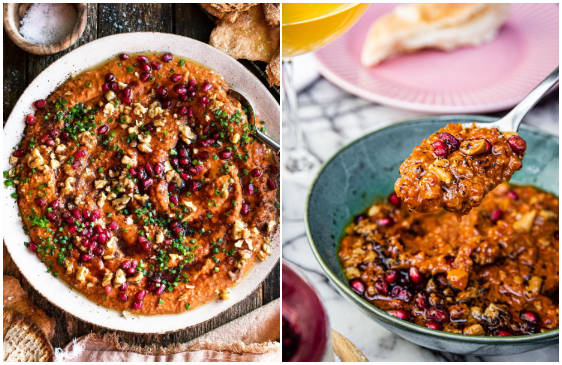 Muhamara is a nourishing prayer originating from the Syrian city of Aleppo. It is made with a combination of roasted red peppers, olive oil and crushed walnuts. Lemon juice, pomegranate acid, garlic and salt are often added to the spread. It is traditionally prepared in a mortar, but with modern appliances the texture can vary. It is usually served individually in small plates or in larger plates, when consumed together.

Freshly baked pie bread is a must-have accompaniment to muhamara, which is usually cut into triangles and used as a "utensil" for direct consumption. This prayer is often part of an appetizer and is served with Baba Ganush, Labne or Hummus, but it is also often used as a prayer for raw vegetables or sauce that accompanies grilled meat and fish dishes.

Roast the peppers and peel them. Put 1 cup of walnuts, pomegranate acid, olive oil, garlic, lemon juice, cumin, salt and pepper and red pepper in a food processor / blender. Stir until combined. Add the peeled peppers to the food processor and mix together until the mixture is smooth. Add the bread crumbs and pulse until combined. If the mixture is not thick enough, add a little more bread crumbs and if it is too thick, add a little more olive oil and lemon juice. Serve the muhamara in a plate and pour pomegranate acid, decorate with pomegranate seeds and 1 tablespoon of chopped walnuts.

A recipe for a "fan" pie with cheese, it will disappear from the table in an hour

An explosion of flavors: Stuffed zucchini with lamb and bulgur

Make a watermelon dessert in just half an hour

VIDEO | Original recipe for the famous Polish "zapiekanka": It can be made in an hour, and the taste will enchant you

Super refreshing: Treat yourself to a delicious watermelon juice or cocktail

Rene Rexhepi closes "Noma", the best restaurant in the world

A slightly different recipe for your favorite summer dish - gouvech