Interview with Vladan Drobicki from "PMG Jazz": Our aesthetics are recognized by the new generation of Macedonian musicians 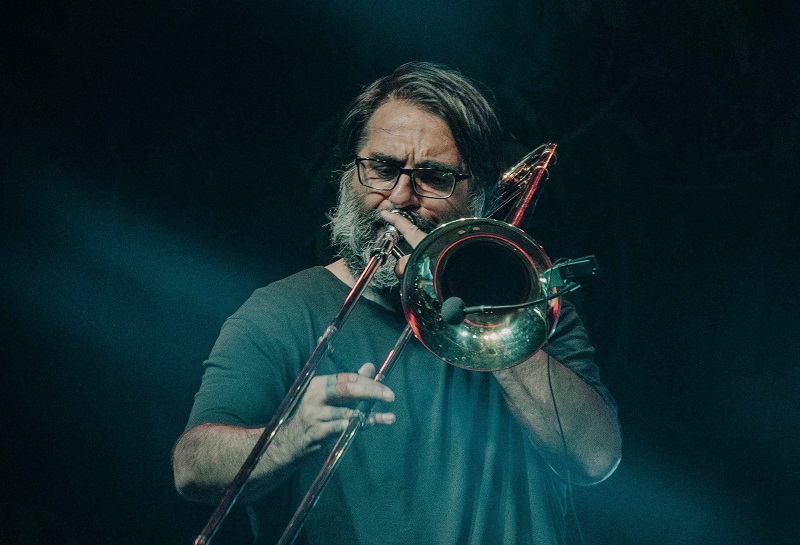 When the trombonist Vladan Drobicki connected with Mirko Popov from PMG Recordings, they created the record company "PMG Jazz", and when they are joined by Sinisa Evtimov, the group "Canton 6" is formed, and here we are talking about the festival "Near Vardar" ".

The trombonist Vladan Drobicki is a graduate of the Faculty of Music in Skopje, at the vocal-instrumental department (trombone department) in the class of prof. Jorgo Stefanovski, and is employed in the orchestra of the National Opera and Ballet. On the music scene he is known for his work in the groups "Setstat", "PMG Kolektiv", and in recent years with "Canton 6". He also collaborates with Marija Kaeva and Gligor Kondovski on their new projects. Together with Mirko Popov, they are the creative base of the record company "PMG Jazz", which has shown excellent results and a large production of published releases.

The second edition of the festival "Beside the Vardar Jazz", where some of the editions of "PMG Jazz" are presented in concert, this year takes place with activities in several evenings during September and October.

The festival announced the presentation of two new vinyl releases: the film music album "Stella" by the group "Ljubojna", which was presented in concert on September 5, and the compilation album "Beside the Vardar Jazz, Wall. 1 ”, which published eight themes that were performed at last year's edition of the festival. On the same night, the group "Canton 6" performed with "Ljubojna", while the festival is planned to end with a concert by "Taxi Consilium" and pianist Dino Imeri on October 6, at the cinema "Frosina" in MKC.

With the group "Canton 6" on September 5 you performed on the first night of the second edition of the festival "By the Vardar Jazz". At the concert, you performed materials from the triple album "Jezus". How did this combination of electronics and trombone happen and practically how much material does the whole album contain?

- The first official collaboration, in fact, started with the album "Fraternit" by "PMG Kolektiv". We spent a lot of time together in their studio. Naturally, the moment came when we decided to continue working on new material under the brand "Canton 6". We have been experimenting with music for some time, and behind us was the collaboration with the Berlin duo Taichman Brothers. All this resulted in extensive recording material, which will be finalized in an album trilogy. The first part of "Jazz" has already been released for "PMG Jazz". These days we are finishing the other two parts.

In the group you perform together with Mirko Popov, with whom 3-4 years ago you founded the record company "PMG Jazz". Do you remember what was the initial moment for founding this label, under which you have already published about 30 issues of contemporary and jazz music?

- At one point we felt that the existing publishing houses, which treat jazz music in our country, are not far enough and do not meet the needs, first of the Macedonian jazz musicians, and then the domestic audience. The presentation they made for their releases was not satisfactory. In a short time we reached 27-28 releases, one of which is among the best for 2019 on the entire Bandkamp platform, one is among the best for the month of May on it, and one is among the best albums of the week. We are focused on digital publishing because nowadays it reaches the audience the fastest and cheapest, but we also print CD copies, and lately also vinyl records.

How do you make the selection of the groups that publish for "PMG Jazz" and what is the cooperation with the musicians?

- There is no rule according to which we choose the artists. The music must be quality, new, original. Our aesthetics is recognized by the new generation of Macedonian musicians. The sound we produce is characterized by a strong character, sociological message and free thought, and in terms of the musical-aesthetic norm, it belongs to the modern music of the 21st century. In fact, the commonalities of all our releases have led some foreign critics to recognize in us a "New Wave on the Jazz Stage."

Last year you had a successful first edition of the "Beside Vardar Jazz" festival. How did you feel when you found out that the second edition will not be supported by the Ministry of Culture?

- In a situation when in a pandemic year you have one of the most successful events, without any organizational remarks, and a very satisfied audience, it is natural to expect things to continue to go as it should. For reasons unknown to me, someone in that famous ministry decided as he did and the help we expected was missing. We invest in our work, above all, labor, personal authority and image. Our co-workers recognize all this and unreservedly find a way to help us. This year we have two festival evenings with a total of four concerts, we are promoting two vinyl and one CD release. In the year that is considered catastrophic for the event industry, we have 18 produced editions. Let the ministry have the courage to continue to ignore this.

However, the second edition is already underway. There were two listening promotions and a concert by "Ljubojna". You have already posted music from the first edition of the festival on vinyl. For what purpose?

- The expansion of streaming platforms has led to the CD media becoming obsolete. At the same time, a group of audio enthusiasts appear, who prefer a solid piece of vinyl in their hand, which gives them exclusivity of the audio material. We are one of them. We love when you get a finished work in your hands, ie 180 grams of vinyl placed in a white envelope, and around it with top aesthetics formed two, four or six-sided cover. We show determination that we value what we publish the most, we stand as a "label" behind the releases and we intend to be present on the music and jazz scene in the long run.