Conversation with Slobodan Tanevski: Pioneering steps in creating a modern radio expression on the Skopje air 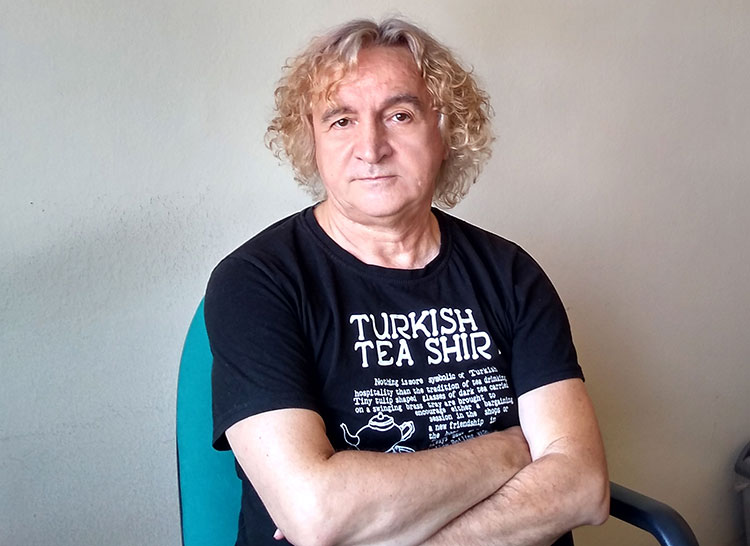 Part of the former crew of the first independent radio in the Skopje (Macedonian) air with an exhibition of artifacts, documents and photographs within the "Skopje Summer" in Kurshumli-an, marked 35 years since the start and 30 years since the closure of the Youth Radio Club 100 “.

The first independent radio in the Macedonian air "Club 100", which operated within the USO "Orce Nikolov" in Skopje, was run by the then professor Slobodan Tanevski. Today he is the editor-in-chief of the science and technology magazine Emitter, which has existed since 1995, and a lecturer at the EFTA University of Audiovisual Arts, but even after 30 years he has fresh memories of working with the Youth Radio Club 100.

What was the purpose and purpose of the exhibition in Kurshumli-an?

- In the year when the 30th anniversary of the independence of the Republic of Macedonia is being celebrated, the idea of ​​setting up an exhibition for the first independent radio in the Macedonian air - the Youth Radio "Club 100" simply emerged. Namely, the Youth Radio existed exactly at the time when 30-35 years ago great social changes, democratization, pluralism, independence and a new beginning took place. It was the time of the birth of a new chapter in Macedonian history, and part of that recent history was the Youth Radio "Club 100", as a witness and participant, but also as a harbinger and initiator of certain processes, at least in the field of electronic media.

With the exhibition we wanted to remind of those pioneering steps, the enthusiasm with which we worked at that time, the exciting events and the many small but significant "victories" of the team in the form of a new radio expression, unusual show or jingle, own cassette releases, technical equipping with self-construction of the necessary devices… Also, with the fact that the Radio radiated only on the territory of the city of Skopje, it naturally came to this exhibition to be part of the "Skopje Summer 2021".

How was the Youth Radio constituted and what did it mean to be outside the broadcasting system of the then Radio Television Skopje at that time?

- The idea for the Youth Radio came as a result of the dissatisfaction of the then only two radios in Skopje (Radio Skopje 1 and 2), where there were only a few shows with rock music and modern radio expression (Disco selector, Radiournebes, Soul Rally…) . On the other hand, there were already radio stations in the neighborhood that had a dynamic contemporary program with lots of rock music. Here, first of all, I mean Radio Belgrade 202, which I regularly listened to with the help of a large antenna. So gradually I started thinking about creating such a radio, and the dice fit when in 1985 I was hired as a professor at USO "Orce Nikolov" of the first "targeted" generation of electrical technicians in electronics.

Then for the needs of practical teaching we bought several instruments and visual aids (gramophones, tape recorders, cassette players, microphones…) and sometime in the spring of 1986 I proposed to establish a Youth Radio in the school with several goals: encouraging and awakening creativity in young people, supplementing and upgrading practical teaching, but more importantly - as an attempt to create a new modern radio expression that will touch and engage listeners on many levels, with the ultimate goal of gradually building a professional radio that will be in step with the times and needs of young people.

At first, everyone was skeptical that such a thing could be done at school. And we really had a lot of challenges to solve, first legally, then technically and programmatically. First we prepared a report on the needs, goals, technical equipment, organization and program conception of the Youth Radio. Then we had to get approvals and positive opinions from a dozen institutions and organizations, and finally, on the basis of all those documents, the Federal Directorate of Radio Communications from Belgrade issued us a temporary broadcasting license.

In parallel with this process went the technical preparations in which my students and I made a small radio transmitter of only 2 watts and a suitable antenna for it, we connected all the devices in one whole in my classroom, which served as a "studio", and we started with the preparations radio broadcasts. The youth experimental radio "Club 100" had its first broadcast in the period from 25 to 29 May 1987. 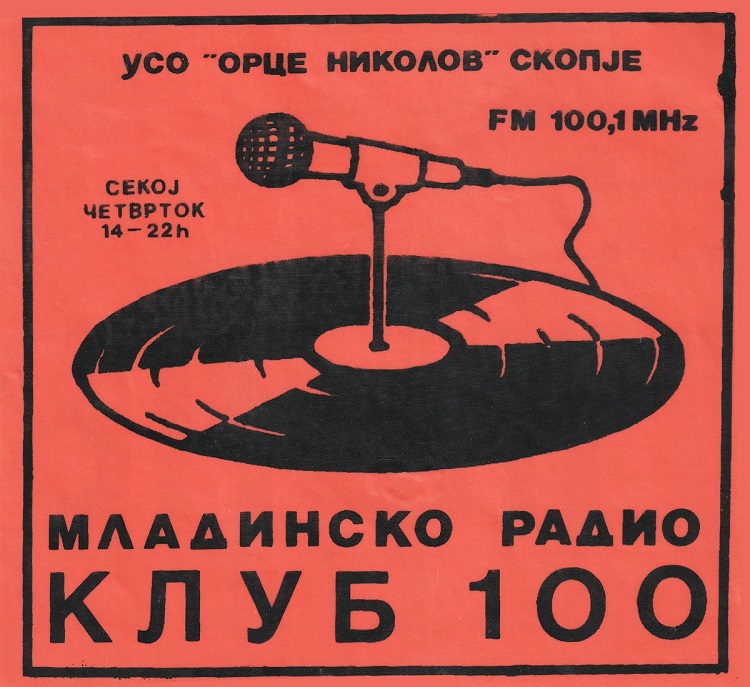 I must say that although we were an independent and independent media throughout the period of our existence, we had great support from Radio Television Skopje. They helped us with expert advice and donated a professional antenna and two old 10 watt transmitters (of which I assembled one correct) and with them the broadcast in the period 1989-91. During that period we made a larger radio audio mixer, a 15-meter antenna, a device for studio communication and signaling and a small studio with a speaker booth and directing.

Practically, how long and with what team did the radio work?

- The radio broadcast from 1987 to 1991. The first two years were experimental, airing mainly towards the end of the school year. After receiving the permits and the technical completion from 30.11.1989, the radio started broadcasting regularly. The team that worked in the radio was composed of students from that time, both from USO "Orce Nikolov" and other high schools, but also from students from several faculties. They mastered the secrets of the craft through work, but also with the help of the course for radio journalism and leadership led by Ljupчоo Dimitrovski and Dragan B. Kostic. Each year, about 30 collaborators were involved, who, driven by youthful enthusiasm, with unusual seriousness and professionalism, broadcast on the radio current events from all walks of life, and not only to young people.

The radio followed the events and happenings from all areas and spheres, and through appropriate comments, reviews, criticisms, polls, interviews and conversations with appropriate guests followed the pulse and rhythm of the time in which it existed. Those were the days when there was no Internet and all information was accessed "manually", by "digging" through many books, lexicons, encyclopedias and magazines. There were no digital playlists either, but the music was played from records (vinyl), CDs, cassettes and tapes.

It is especially valuable that the pupils and students of that time who created the radio, today are top journalists, media workers, engineers, entrepreneurs and established personalities who proudly emphasize the importance of that period and their work in the Youth Radio "Club 100".

How did the first independent radio go off first?

- Our ambition and plan was for the Youth Radio to grow into a professional radio with a 24-hour program and a modern radio expression. It was a completely realistic and achievable ambition given the technical and organizational readiness and the quality of the realized program. But the school did not think in that direction (they were satisfied with the occasional broadcast), so my proposals for the transformation of the Radio were rejected.

On the other hand, I had information that democratization would follow on the radio and that several new private radio stations were being prepared, to which it was clear that we would not be able to compete with a several-hour volunteer program. Tired of all the happenings and faced with the impossibility of realizing the creative plans, I decided to put an end to it and on June 20, 1991, "Club 100" had its last broadcast with a special collage program.

At the exhibition were presented about 20 boards with artifacts left from the work of MR "Club 100". Where did you find the artifacts 30 years later?

- The initial proposal for such an exhibition of artifacts came from colleague Toni Mandzukovski - Mandzuk. Through the Facebook group of the Youth Radio, we sent a call to the former members of the radio to "dig" through the personal archives and thus we came to an appropriate number of documents, work plans, photos, texts and recordings. We were also in the gym. "Orce Nikolov", but we failed to find the transmitter of "Club 100", but that's why we found the original door of the studio ("The door that opened the future"). If we add to that the seven cassettes from the publishing portfolio of MR "Club 100": the compilation cassettes "Demoscope (1 and 2)", the radio dramas "Police Story (1 and 2)" of the theater group "Worm", as well as the albums " Рemer "and" Macedonian Roots "by" Zvon "," Together we are a face "by" Deviant "and" Ritual and ashes "by the group" Clerojo ", the outlines of the exhibition have already been seen. 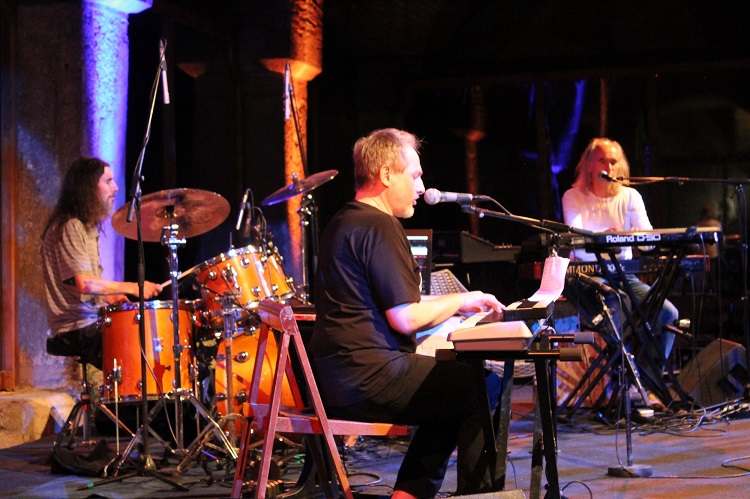 At the exhibition we had a small concert of Dean Shkartov and Ventzislav Smakoski from the group "Clermont" and Vlatko Kaevski from the group "Cyborg", who reminded the audience of their music, which was part of the program and cassette editions of Youth Radio.