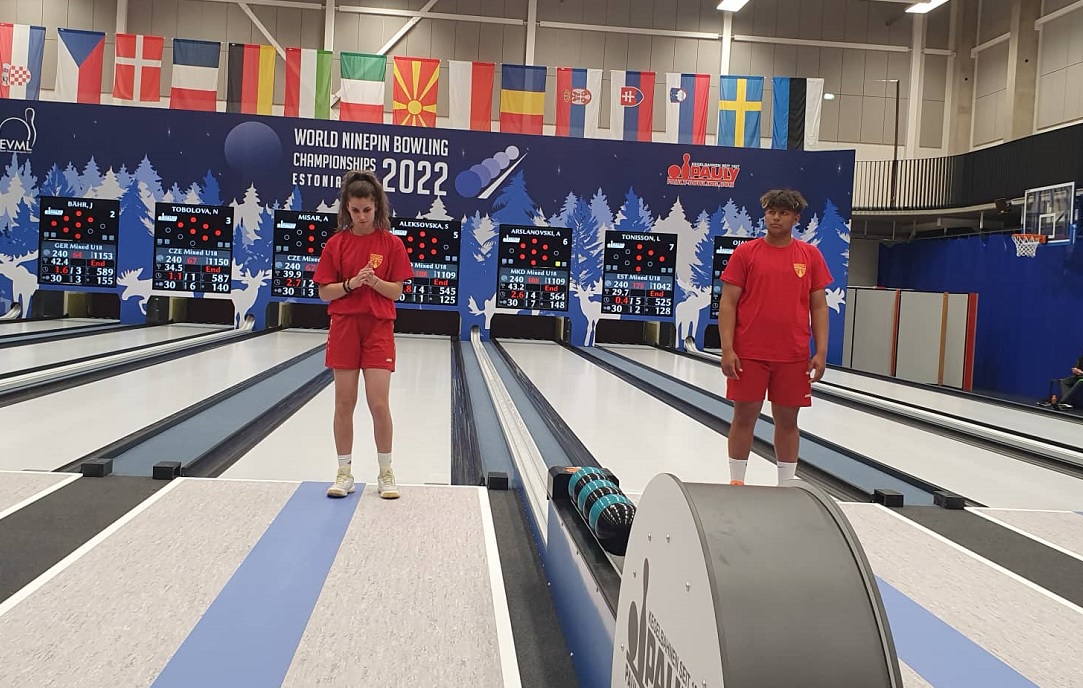 Stefanija Aleksovska and Arhan Arslanovski at the World Cup in Estonia / Photo: Bowling Federation of Macedonia

For a whole decade, the account of the Federation has been blocked, we have been struggling for 10 years and generally at the expense of certain clubs - says the selector of our youth bowling team.

И bowling is one of the sports that we hear very little about in our country, but which also knows how to bring top results. One of the greatest successes in the history of Macedonian bowling was winning the second place of the men's national team at the World Team Championship, held in Zalaegerszeg, Hungary, 2013.

In the past period, Macedonia was represented at the World Cup in Estonia Stefanija Aleksovska and Arhan Arslanovski led by the selector of our youth bowling team, Igor Mihajlovski.

Arslanovski managed with an exceptional game to enter among the best eight players at the World Cup with a result of 578 (205) placing in seventh place.

We talked with the coach Mihajlovski about the performances of Stefanija and Arhan, about the situation with bowling in our country, in which direction to improve things so that this sport can rise to a higher level.

Stefanija Aleksovska and Arhan Arslanovski performed at the World Cup in Estonia, how satisfied are you with the results, and how strong was the competition?

- I am partially satisfied. I am satisfied because these children have very few league matches in the country, without relevant competition. The lack of difficult matches with their rivals from other countries reflected on their security, we miss that a lot in the preparation cycle. On the other hand, I am not satisfied because they did not give their best, especially Stefanija who was in great shape with results at home much better than those at the World Cup. We also had an unwanted injury in the final that defocused Arhan to repeat at least a qualifying result, so in the end he barely finished the match achieving a modest result.

Around the competition, played the strongest bowlers from 14 countries in Europe, up to 18 years, generally countries with a very rich bowling tradition and countries that have more leagues, which is not the case with us. Countries that have a system for the development of young bowlers with special programs, camps and strong domestic competition. To our satisfaction, we have shown that we also have quality young bowlers who can equally cope with the best in the world.

Mihajlovski says that for a whole decade the bowling federation has been blocked, everything is generally done at the expense of certain clubs and for such reasons it is difficult to organize performances.

- The current situation of the Bowling Federation of S. Macedonia is tragic. For a whole decade, the account of the Federation has been blocked due to the obligations of previous managements, and for 10 years we have been struggling and generally at the expense of certain clubs or smaller sponsors to provide opportunities for Macedonian national team players because those funds we should actually receive from AMC for representative performances we can not get them for a whole decade. For many it is a dead end situation, but I am one of those optimists who believe that a solution can always be found normally if there is good will. However, it is a sport that has success in our country. That there is will is shown by the fact that the AMC renewed the Bitola bowling alley in 2021 and that is exactly what created the conditions for the Bitola bowlers, especially in the youth categories, to have more.

There will be no performances for the above reasons with the hope that in 2023 the climate will be more relaxed and the opportunity to come out as a team with full national teams (senior, junior or cadet).

Do you believe that enough is being invested in Macedonian bowling, as announced by the federation, there would be no performance of Stefanija and Arhan in Elva without sponsors and Bitola bowling clubs?

- In my opinion, I think that the methodology for the voucher system is very harmful for the smaller sports that do not count so many athletes. The costs are the same, but the treatment is different. Of course, bowling can be an attractive sport for sponsors, but it's a fight we have to win ourselves. It is obvious that in our country the sport is being modernized, there are already broadcasts of the matches, the audience knows how to have fun and that is a good precondition for more companies to find their marketing logic. Of course, as a Federation (I speak from the position of vice president) we are open for cooperation and with a little "wind in the back" and greater public support I think we can do a lot for Macedonian bowling on the international stage.