Conversation with "IA Center": The idea is to expand the network of collaborators on the Balkan, European and world level 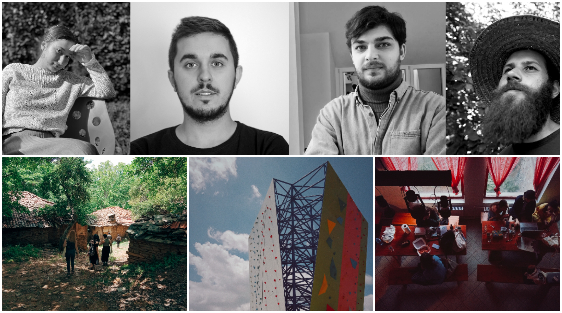 "Such an avant-garde and alternative way of networking, collaboration and creation is a kind of attempt to put pressure on the cultural institutions of the state to raise the level of their own work and create projects that will stimulate the young creative", they tell us from the Center for Interdisciplinary activities.

The first edition of the Center for Interdisciplinary Activities was held in the mountain lodge "Vrteshka", from June 23 to 26, in which 35 participants from different fields of art took part.

The event was organized by four creatives: Damjan, Kiril, Svetislav and Tamara, who idealistically try to open the lines of communication between different artistic disciplines and artists, in order to ennoble the creation of works through the creation of resources that are not consumed, but have potential to increase.

Who are you and how did you get together? How was the Center for Interdisciplinary Activities created and what was the idea behind your first event?

– We are people whose daily practice is creative work, research, questioning the boundaries and conventions of art forms, the parameters of experiment and people who like to share stories that make sense. Our communication has been going on for more than a decade, that is, we have known each other and cooperated since our student days. Among us there is one theater director, Damjan Chitkushev, two film directors, Kiril Karakash and Svetislav Podleshanov, and one photographer, Tamara Damcheska. The topics of our fellowships have almost always been provoked by what it means to be creative and create. One beautiful cloudy day, Damjan initiated a meeting and shared his idea about the need to create this form of fellowship in which we can, more people, informally educate each other, form an artistic community where we will share, create, discuss, think analytically , will be approached studiously and above all there will be conditions to create works of art that are valuable.

Your motto is the unity of creativity and experimentation. What do you want to achieve with an interdisciplinary approach to art on a personal and social level?

- By creating a space of this kind, the opportunity opens for professionals from different artistic fields to share their experiences and acquire new professional and artistic knowledge about performative arts, experimental film, photography, sound and music. This initiative allows participants and mentors to articulate the meanings of creativity, experimentation, invention and innovation. Experimental and interdisciplinary expressions of sound, image, movement and body will create an encounter characterized by diversity and the search for new opportunities for dialogues through which new ideas will be developed.

What types of workshops were held at "Vrteshka" and how did they go? What was the working dynamic between the lecturers and the participants?

- Within the framework of the first edition of the Center for Interdisciplinary Activities - Vrteshka, there were five workshops: Contemporary theater tendencies, Abstract landscape - analog photography, Only the dream is reality - experimental film, workshop on sound and activities in nature. Before the start of the event, the selected collaborators were contacted by us as organizers and the topics, possible ways of working were shared with them and several online meetings were held, in which the technical and creative possibilities available to them were discussed. Before arriving in the creation space, the participants were familiarized with the schedule and dynamics of work, that is, 2 blocks of 5 hours each were planned for all three days. Each workshop had its own base with conditions for creation, and in addition, a space for cinema projections, a rock for sport climbing, a "chill-zone" and yoga were defined. Also, the environment of the "Vrteshka" mountain lodge was one of the main factors that provoked the imagination and inspiration of all present.

What were your impressions of the work approach, and what did the participants praise or complain about?

– The first edition of "IA Center" does not imply a summer school, a camp, a place where someone will give a boring lecture and someone will try to learn something, but a space where we will all discuss together, share our ideas, thoughts, creative dilemmas, experiences and then we reflect, associate and project within our capacities. The challenge in the "IA Center" was how to establish new contexts with different people and in those contexts to create a system in which everyone participating in the work process can develop in parallel. Apart from the fact that each group of authors created a work in the field of "native" artistic expression, each workshop managed to establish an interdisciplinary relationship with the others. Of course, time is never enough, so the remarks of the participants were also in that direction. Our possibilities as organizers had a certain limit and we hope that the conscious community and state will recognize the importance and invest more in events of this kind because big and important decisions come after recognizing the differences.

How did the organization of the first artistic community go? Is this a sustainable method for networking, erudition, and ultimately, creating works?

- We can proudly announce that the first edition of "IA Center", despite the short time of operation, was more than successful. We are all very satisfied with the created creative material that does not mean the end of a process but only a certain point in its life. The participants made contacts that are significant and those contacts will result in new works, new collaborations in new contexts. Our idea is to expand the network of collaborators on the Balkans, and further we hope on the European and world level. This avant-garde and alternative way of networking, collaboration and creation is a kind of attempt to put pressure on the country's cultural institutions to raise the level of their own work and create projects that will stimulate the young creative to be inspired, to take risks, to clearly articulate his thoughts, create a vision, boldly enter the process of self-reflection, realize and raise the level of consciousness in the environment in which he acts.

Four zodiac signs will get big money in the fall: A solar eclipse will crush others