Check out the email: A woman won $ 3 million via spam 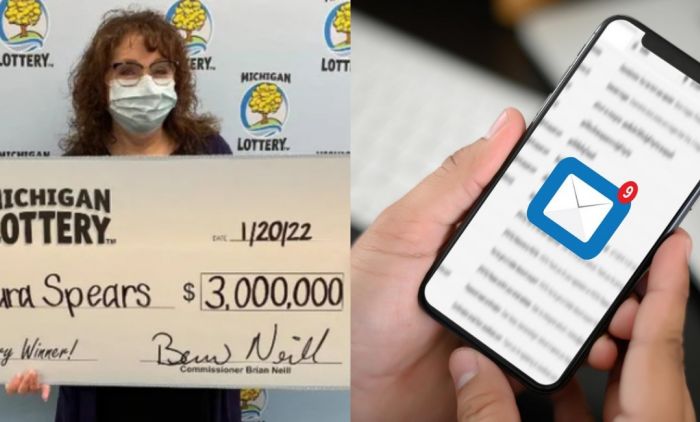 If you are not in the habit of checking your unsolicited emails, you will probably check your emails more often after this news.

Laura Spears from Auckland, Michigan, took home the $ 3 million lottery prize she won. Spears bought a ticket on Mega Millions Online online on New Year's Eve and was declared the winner of the Michigan lottery.

What is the probability?

Laura Spears (55) came across an e-mail with a cash prize when she decided to check her spam on her computer because she was missing someone's email. The winner, who successfully combined five numbers to win the million dollar prize, managed to multiply her prize by three times because she paid a "Megaplier", which can increase the winnings up to five times.

"I saw an ad on Facebook that the jackpot of" Mega Millions "is quite high, so I applied for the order and bought a ticket. A few days later, I was looking for someone's email that I was missing, so I checked my spam folder on my email. Then I saw an e-mail from the lottery saying that I had won the prize. I could not believe what I was reading, so I applied to my lottery account to confirm the e-mail - she explained Spears.

How he will spend the prize

Spears took its winnings at the lottery headquarters in Lansing, Michigan.
"For me, all this is still so shocking - that I really won $ 3 million," said the happy woman, confused.

Spears, who works as a nurse, said she planned to share the money with her family and use it for early retirement.

She added that from now on she will check the spam folder more often.

"I have definitely added the Michigan lottery to my list of trusted senders, just in case I ever get lucky enough to receive another e-mail for a huge prize," she added. Spears.

The Mega Millions jackpot, which operates across the United States and the Virgin Islands, currently stands at $ 376 million, the lottery operator said.

Conversation with Mary Eritsian and Armine Pilojan Vrteska: From a simple coffee chat to a unique small business

PHOTO | A story with a happy ending: A rescue horse left on the terrace of an abandoned house in Debar Maalo