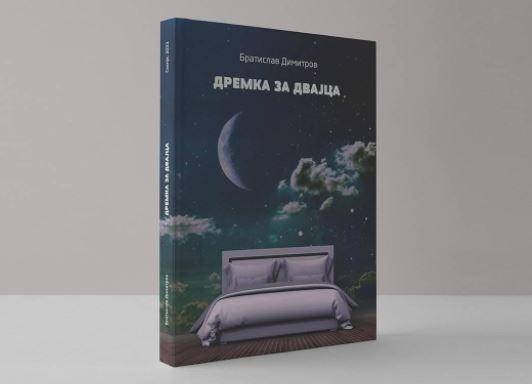 Tomorrow, October 16, in the City Bar "Pelister" on Macedonia Square, starting at 12 o'clock, a promotion of the new book by the playwright and columnist Bratislav Dimitrov will take place.

"Dream for two" is a selection of old and new columns and stories that will make you laugh to tears and awaken positive feelings and emotions.

Namely, it is a book, without daily politics, which contains a lot of humor and passion.

The promotion will take place on the summer terrace and according to the valid protocols for visiting catering facilities.

Bratislav Dimitrov was born on March 22, 1952 in Skopje. He was educated in two eight-year schools, four high schools, two faculties and one vocational school (not always of his own free will). He graduated from the Faculty of Dramatic Arts in the class of Professor Ljubisa Georgievski. Permanent graduate of literature. Mustache holder since 1971. He lived and worked in London, Amsterdam, Norway, etc., as a waiter, forklift driver, gas station seller, disc jockey… He was a candidate for mayor of Skopje. For thirty-eight years he was a playwright at the Macedonian National Theater and for two years director of the "Theater for Children and Youth".

He wrote eleven plays: "Hawthorn Bush", "Revolutionary", "Pearls and Pigs", "Das Capital", "Mausoleum", "Nightmare", "Neither Charliness", "Personal Ads", "Nights in White Satin" , "The World's Most Important Thing" and "Secret Weapons". A monodrama "Like the bluest eyes of all time" and a new version of "Poor little hamsters" by Gordan Mihic. He also wrote three plays for children: "Puppy Puff", "The Wedding of Itar Pejo" and "King Marko". All plays are performed in Macedonia and some abroad.

He started writing columns in 1969-71 in the then student newspaper "Fokus", and then in "Zena", "Dnevnik", "Utrinski Vesnik", "Tea Moderna", "Publika" and "Radio Slobodna Makedonija…".

He has published five books with columns: "A little blues for your soul", "The most important thing in the world", "Download the sky a little to climb", "The last chords of silence" and "Recipes for loneliness". The latest book "A nap for two" is being prepared. His books are printed in large numbers, and the first two (along with Tea Moderna) in a fantastic 70.000 copies! He is one of the few authors in the world who is read equally by young and old, rich and poor, nuns and monks, criminals and prostitutes, academics and workers…

Scenarios for shows, music videos and television dramas have been performed for him. He is the author of the TV series "Salon Harmony", "Ordinary People" and co-author of the series "From Today to Tomorrow". He directed two plays: "Crazy for Love" by Sam Shepard and the choreography "The Last Game" based on his own libretto.

He has participated in several European and world festivals.

Awards: Main award for the role in the TV drama "Tome from the gas station" at the Portoroz TV Festival. Main prize for the dramatic texts "Hawthorn bush" and "Nights in white satin" at the theater games "Vojdan Chernodrinski" in Prilep. Main prize of the anonymous competition for the grand opening of the new theater "JH-Dzinot" in Veles and "November 13" prize of the city of Skopje in the field of culture.

He planted seventeen trees in front of the building in which he lives.

VIDEO | They love the Balkans: Courtney Kardashian, Travis and her daughter play a Bosnian turbofolk song