The parliamentary debate continues, the MPs should vote for the new Government by midnight 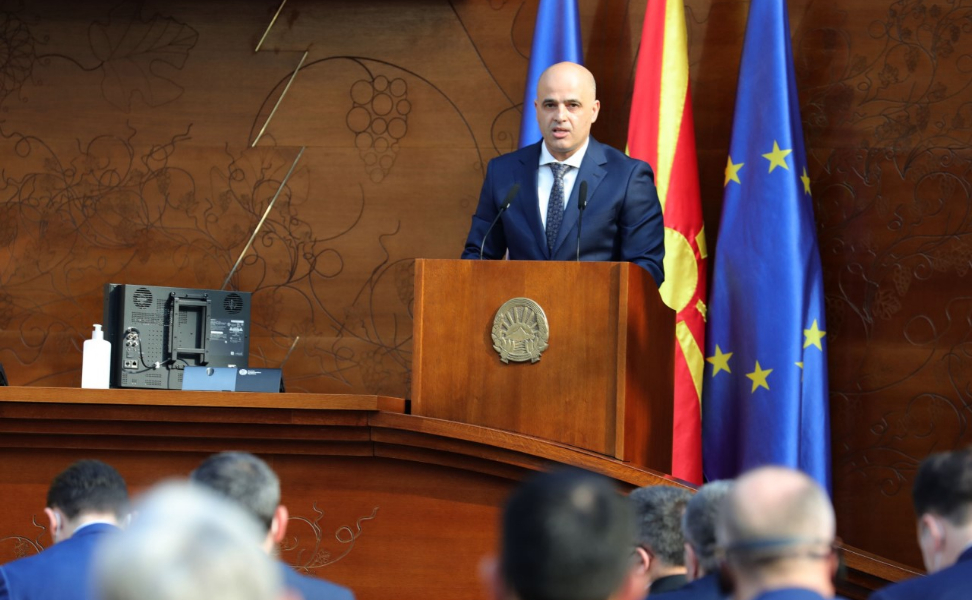 At yesterday's session, MPs from the opposition and ruling parties could hear completely opposing views on the composition, program and policies of the new government.

The MPs will continue the 60th session today at noon with the only item on the agenda - the election of the new government. Prime Minister-designate Dimitar Kovacevski presented to the MPs yesterday the work program of the new government, which will have 21 members. SDSM and the coalition will have 12, DUI six, and Alternative three ministers.

The focus of the new government, as announced by Kovacevski, is creating greater and sustainable growth of the economy in the next two and a half years. In yesterday's speech in the Parliament, he announced the doubling of economic growth, and GDP growth of up to 5 percent.

The main challenge in the economy, he said, remains facing the negative effects of the pandemic and the energy crisis. He announced that the minimum wage will continue to rise, which will contribute to growth и on the average salary.

Increasing pensions will also be one of the new government's first decisions. The new government, as the prime minister pointed out, has a plan to deal with the economic and energy crisis.

- The Government will implement a strategy that in the short, medium and long term will ensure security with energy supply and sustainability of the energy system. The focus on renewable energy sources and the efficient use of available natural resources, as INTO ce the sun, wind and water are the basis of the Macedonian energy revolution, Kovacevski said.

Prime Minister-designate Kovacevski said in his speech that the talks with the Republic of Bulgaria will continue and intensify, but no one must and will not negotiate for the identity of the Macedonian people.

At yesterday's session, MPs from the opposition and ruling parties could hear completely opposing views on the composition, program and policies of the new government.

The opposition believes that the individual proposed names in the new government are just proof that SDSM does not have a choice and a future that should be trusted and given a chance. According to them, the new government will be a continuation of the previous one and its failure.

The common position of the majority of the opposition MPs is that this government will be a short-term government, which will quickly face its anomalies and that early parliamentary elections will be held very soon.

- The individual proposed names are just proof that SDSM does not have a choice and a future that should be trusted and given a chance. DUI, on the other hand, despite the green agenda, proves that it is not ready for any changes. "I am convinced that DUI itself knows how to change, but also to change the characters with dubious documents for completed education," he said. the MP from VMRO-DPMNE, Dafina Stojanovska.

The opposition also demanded responsibility for the case of Laskarci, the fires that occurred in the summer, the judiciary, the prosecution, the economy, prices, salaries, the Clinical Hospital, education, the unfinished road Skopje - Ohrid, the air, everyone lies, about language, history, and everything that has been negotiated with neighbors about the nation.

Unlike the opposition, lawmakers believe the new government will maintain the positive course of the previous government. The legitimacy, they stressed, was decided by the citizens in the parliamentary elections in 2020, and an additional plus is the increase of the parliamentary majority.

MP Arber Ademi from DUI In his address to the Parliament, he pointed out that everything they have promised so far, they have realized, and as he said, the DUI staff has realized concrete results that can not be disputed.

He added that at the height of the pandemic more than 60 thousand jobs were saved, unemployment decreased, exports increased, and, as he said, DUI staff are dignified representatives who have an idea and vision of how the country can move forward and how to manage with crises such as the migrant crisis, the coyote pandemic in the best way.

MP Darko Kaevski from SDSM believes that the citizens in the early parliamentary elections in 2020 unequivocally supported the ruling coalition to lead the country.

-In those elections SDSM received strong support and mandate from the legitimacy of the citizens in the next four years to implement all those principles and measures that advocated in the election campaign, and then were translated into the government program - economic growth and development, strong investment in human factor, strong investment in human resources, increase of salaries and pensions, improvement of conditions and standard of the citizens…, said Kaevski.

MP Elmi Aziri from the Alliance for Albanians in his speech he mentioned that the citizens are waiting for improvements from the Government, they are waiting for visible results. But, according to him, this government composition will be very difficult to bring results, because they do not think about the results.

The new cabinet will have one more member than the previous one - a minister without portfolio for the diaspora, a post that belonged to Alternative.

Admirim Aliti from Alternative will be the first person of MISA, and Xhemail Cupi from this party has been proposed as a minister without portfolio in charge of the diaspora.

The department of justice should be headed by the university professor Nikola Tupancevski (SDSM). The current Minister Oliver Spasovski (SDSM) remains in the Ministry of Interior.

The positions are also held by the Ministers of Foreign Affairs, Transport and Communications, Finance and Economy, Bujar Osmani (DUI), Blagoj Bochvarski (SDSM), Fatmir Besimi (DUI) and Kreshnik Bekteshi (DUI). Goran Milevski (LDP / SDSM coalition) remains in the Ministry of Local Self-Government, and there are no changes in the Ministry of Environment and Physical Planning where the current Minister Naser Nuredini (DUI) remains.

The Ministry of Political System and Inter-Community Relations will continue to be headed by Artan Grubi (DUI). Ljupco Nikolovski (SDSM) is returning to the Ministry of Agriculture, Forestry and Water Economy.

The parliamentary debate on the election of a new government lasts for a maximum of two days, and the election of the government is voted after its completion, ie no later than 24 hours on the second day or in this case on Sunday until midnight. The Government is elected if the majority of the total number of Representatives in the Assembly votes for it.

"It is good that the whole dispute with Bulgaria has been reduced to several key issues," Maricic said

Kuleba: Ukraine and S. Macedonia are companions, not competitors on the European path

Stevanovic: We are watching the situation with measles, we are ready to deal with a contagious disease