Three smugglers were detained and migrants were found 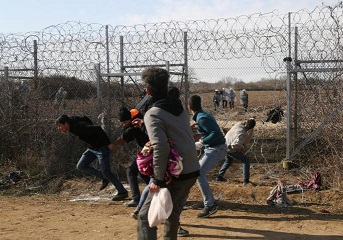 During the day, the migrant smugglers will be brought before a Pre-Trial Judge at the Basic Court Skopje 1.

Tonight in the vicinity of the village Stojakovo, police officers from the police station for border crossing Bogorodica found 19 people - migrants (16 from India and 3 from Pakistan).

After the undertaken measures, it was determined that the persons M.O. (31), AA (21) and M.A. (22), all of Pakistan, falsely pretended to be from India, and were in fact the guides of the group which, after accepting it, they intended to pass on to Greece.

The case was reported to the Public Prosecutor from The Basic Public Prosecutor's Office for prosecution of organized crime and corruption by whose order the three persons were deprived of liberty and detained at the Gevgelija Police Station. After the complete documentation of the case, charges will be filed against them under Article 418 of the Criminal Code, and during the day they will be brought before a Pre-Trial Judge at the Basic Court Skopje 1.