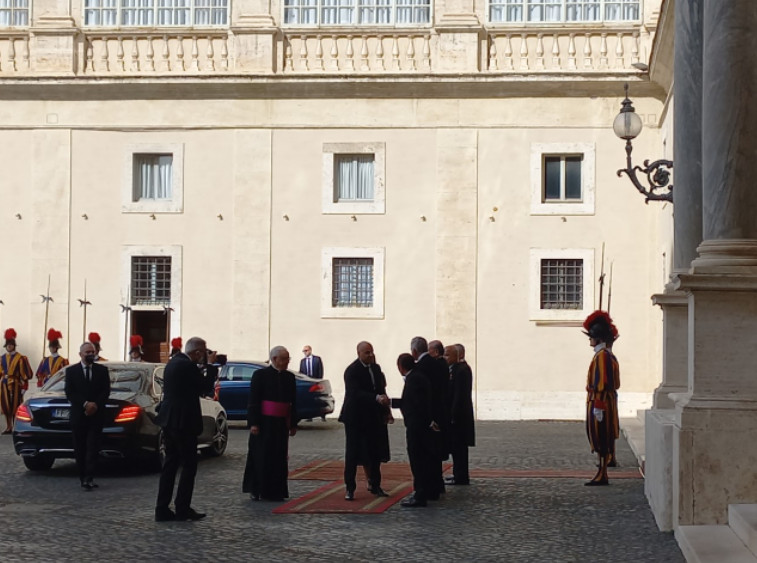 The tete-a-tete meeting of the Prime Minister started Dimitar Kovacevski with Pope Francis in the Vatican. The meeting is realized within the official and working visit of the delegation of Northern Macedonia to the Vatican and Rome, on the occasion of the celebration of May 24 - the Day of the All-Slavic educators Saints Cyril and Methodius.

After the meeting, it is planned the audience with Pope Francis, which together with Kovacevski will be attended by daughter Tamara Kovacevski, as well as members of the delegation Foreign Ministers Bujar Osmani, Interior Minister Oliver Spasovski, Culture Bisera Kostadinovska Stojcevska.

The delegation also includes Martin Popov, Head of the Cabinet of the Prime Minister, Ana Andreeva, Secretary for Communications, Public Relations and Protocol of the Prime Minister, Darijan Sotirovski, Director of the Commission for Relations with Religious Communities, Nikola Jankulovski, Rector of the University "St. . Cyril and Methodius ”, Pimen Ilievski, Metropolitan of MOC-OA, Josif Todorovski, Metropolitan of MOC-OA and Zoran Stojanov, Dean of the Strumica Diocese of the Catholic Church.

The program in honor of May 24 - the Day of the All-Slavic educators Saints Cyril and Methodius, today the delegation of the Republic of Northern Macedonia will wrap up by laying a wreath at the memorial plaque in Macedonian in the Papal Basilica of Santa Maria Maggiore and with an appropriate cultural and artistic program in Our prominent artists living and working in Italy will also participate.

Mehmedovic: The situation with covid-19 is monitored on a daily basis, so far no new measures are planned

"Skopje Prison" under audit scrutiny: It is not staffed enough and there is no person to check the quality of food

Fuels are getting cheaper, prices remain above MKD 100 per liter