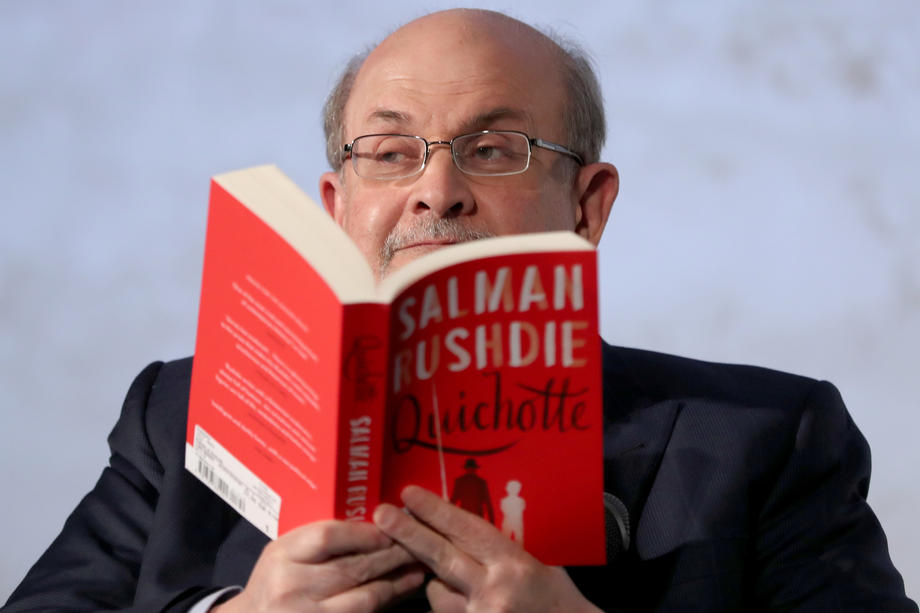 Police in the US state of New York say that the British writer of Indian origin Salman Rushdie suffered a stab wound in the neck after he was attacked on stage today.

After the attack, he was transported by helicopter to a local hospital. The attacker is in police custody.

According to an AP reporter who was at the Chautauqua Institution building in upstate New York where Rushdie was scheduled to give a lecture, he said he saw a man run onto the stage and start "hitting or stabbing" Rushdie.

Eyewitnesses state that those present immediately jumped on the attacker and dragged him away and came to Rushdi's aid and raised his legs in the air.

A doctor who was at the scene, where an as-yet-unnamed assailant tried to kill the writer, told The New York Times that Rushdi had been stabbed multiple times, including once in the right side of the neck. Immediately after the attack, a large pool of blood formed under his body. She says that despite the brutal attack, Rushdi was breathing and had a pulse.

New York State Governor Kathy Hochul paid tribute to the police officer who, she said, "saved Rushdie's life" at an emergency news conference held after the assassination attempt on Rushdie.

She described Gead Chautauqua, where the attack took place, as "a very quiet rural community" and "an ideal place for speeches by prominent figures like Rushdie."

Hochul strongly condemned the attack on the writer, adding that "it is important that people feel free to speak and write the truth".

"This is an attack on freedom of speech and opinion, an attack on the basic values ​​of this country. I hope that Mr. Rushdi will recover quickly and completely and that the perpetrator will be justly punished," wrote Schumer on Twitter.

Famous authors and writers have posted messages of support for Rushdie on Twitter, including Stephen King, J.K. Rowling, Neil Gaiman and Nigella Lawson.

Today, Rushdie was scheduled to speak at the Chautauqua Institute in New York State about the United States as an asylum for writers and artists, "as a place for creative expression," the institution said.

The UK writer was forced into hiding for a decade after Iran's Ayatollah Khomeini issued a religious decree (fatwa) a year later ordering believers to kill the writer for the novel's alleged insult to Islam.

In 1998, the Iranian government announced that it did not support the fatwa, but also that it would not withdraw it.

According to Islamic doctrine, a fatwa once pronounced can never be withdrawn, especially if the person who pronounced it died in the meantime, as was the case with Khomeini (1902-1989).

Rushdie entered the world of literature in 1981 with the novel Midnight's Children, set in his native Mumbai, which begins at midnight on August 15, 1947, the moment India gains independence from Great Britain.

Defended Russians fleeing mobilization: They deserve asylum in the Czech Republic as well as Ukrainians

VIDEO: The number of victims in the women's revolution in Iran is growing, among the killed there are also children

VIDEO: Canada was hit by a terrible storm, several houses fell into the sea

VIDEO: Zelensky promised the Russians three things if they surrender