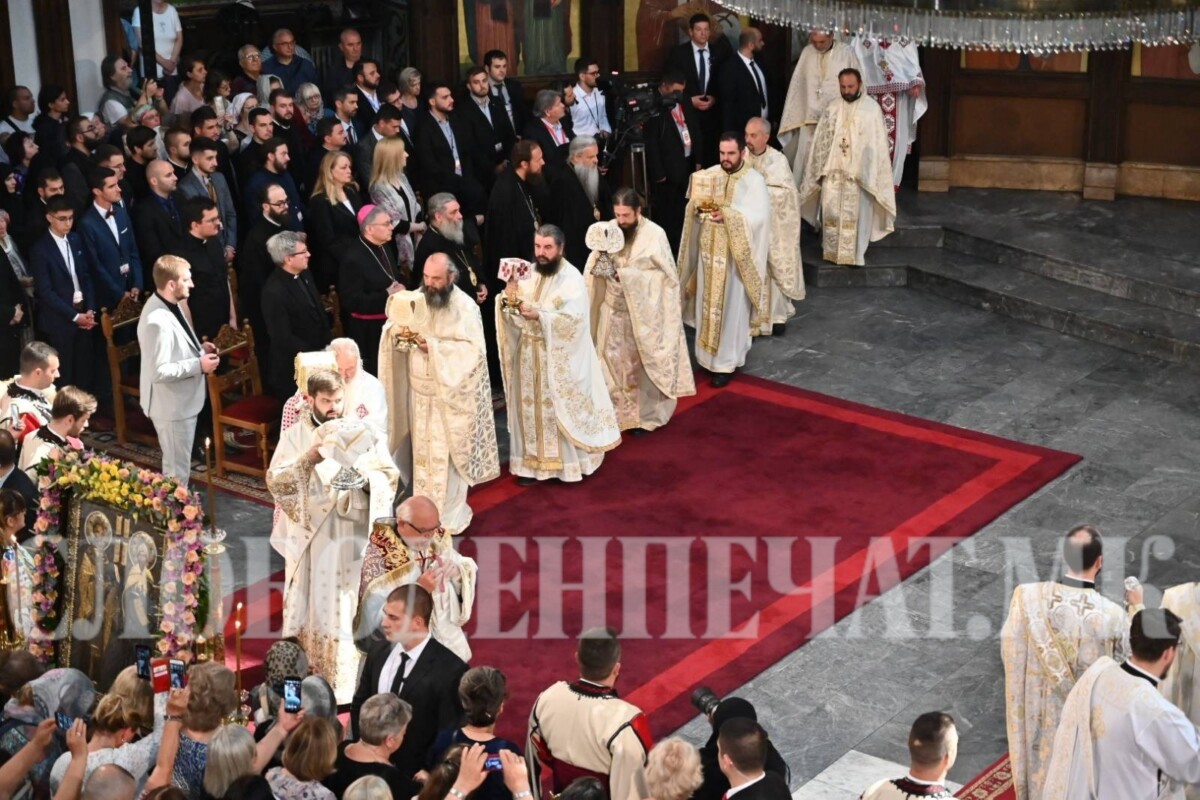 Joint liturgy of MOC-OA and SOC in the Cathedral of St. Kliment Ohridski in Skopje, Photo: Free Press / Dragan Mitrevski

The news about the joint liturgy of the MOC-OA and the SOC in the Cathedral of St. Clement of Ohrid in Skopje for the approval and blessing of the Serbian Patriarch Porphyry for autocephaly of the MOC-OA is published on the official website of the Serbian Orthodox Church, and was in the headlines in all Serbian media, said the MIA correspondent from Belgrade.

The official website of the SOC, entitled, "Patriarch Porphyry - God is the Alpha and Omega of our existence in history and eternity", announces the decision of the SOC.

- The Holy Synod of Bishops unanimously and unanimously met the demands of the Macedonian Orthodox Church - Ohrid Archbishopric and blesses, approves, accepts and recognizes autocephaly. At the same time, the Holy Council of our Church instructed the Synod and the Patriarch together with Archbishop Stefan and his Synod to work out all the technical and organizational details, followed by a solemn proclamation with an official act, for which all local Orthodox Churches will be notified according to their canonical order and will be called to accept the autocephalous status of the Macedonian Orthodox Church - Ohrid Archbishopric, reads the statement of the SOC, which adds "brothers and sisters, we are sure that all other local Orthodox churches will welcome it this news and they will rejoice that our Lord is growing, that His Church is growing ”.

Believers in Serbia through the official website of the SOC could directly and in Macedonian language follow the holy hierarchical liturgy of "His Holiness the Patriarch of Serbia Mr. Porphyry and His Beatitude the Archbishop of Ohrid and Macedonia Mr. Stefan, on the feast of St. Cyril and Methodius, in the cathedral of St. Clement of Ohrid in Skopje ", as it is written on the website of the SOC.

The media also reported the reaction of President Stevo Pendarovski, who announced today that he had a brief meeting with Serbian President Aleksandar Vucic in Davos and that the two leaders welcomed the decision of the Serbian Orthodox Church to recognize the autocephaly of the Macedonian Orthodox Church - Ohrid Archbishopric ) as a "step in the right direction."

Of the initial analyzes, the text in "Danas" entitled "Church and NATO" is noteworthy, stating that "the recognition of the independence of the Macedonian Orthodox Church is a smart and very serious political decision of Patriarch Porphyry and Vucic" and that "the complicated "A church dispute covers the essence, and that is that it is a church in a NATO state."

- With its attitude towards the Macedonian Church, Belgrade openly and strongly stated that it can be extremely constructive when it comes to something important for NATO… This decision shows the adjustment to reality despite the chaotic messages sent to the public, writes "Danas".