The fire near Kocani has been brought under control, but has not yet been completely extinguished 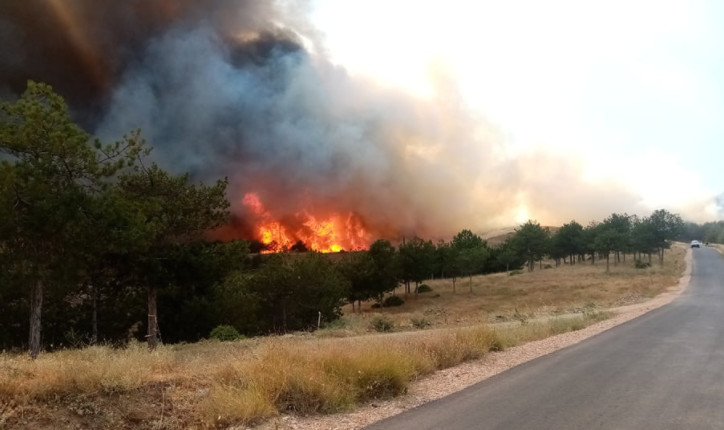 The fire that threatened to affect the settlements in the northeastern part of Kocani this afternoon has been brought under temporary control.

The firefighters from the Territorial Firefighting Unit from Kocani, as well as their colleagues from Stip, Vinica and Makedonska Kamenica, members of the Police and the Army, as well as employees of the utility companies "Vodovod" and "National Forests", participate in the action for extinguishing the fire. institutions and local population.

Due to the seriousness of the situation, two ARM helicopters were hired, with the support of which the fire was localized, but it has not been completely extinguished yet.

- We will monitor the situation during the night, due to which there will be several mobile teams in the field, which will alert if there is a need to intervene. We will continue with the firefighting activities early in the morning and if necessary we will ask for help again from the Directorate for Protection and Rescue and the Crisis Management Center. The citizens and their property have priority in the protection from the fire element, but we want to prevent the fire from spreading again in the forest belt, said the mayor of Kocani, Nikolcho Iliev.

In the fire that broke out the day before, over 150 hectares of evergreen and other types of forest have burned so far, and with the maximum engagement of all those who participate in extinguishing the fire, its expansion in the urban part of Kocani was prevented.

Vladimir Zmejkovski, one of the founders of VMRO-DPMNE, died after a long illness

The arrested thief from Skopje "operated" on women, introduced herself as an enumerator and a nurse

Tragedy: A worker died after a fall while performing construction works in Gazi Baba

Took 12 denars for surgery: Eight-day detention for a doctor from Kumanovo for accepting a bribe

199 drivers sanctioned in Skopje, 44 for speeding

An elderly man was physically attacked in Kisela Voda

The girl from the orphanage changed her statement, saying that she lied that she was beaten and raped