Fires are not only extinguished by air 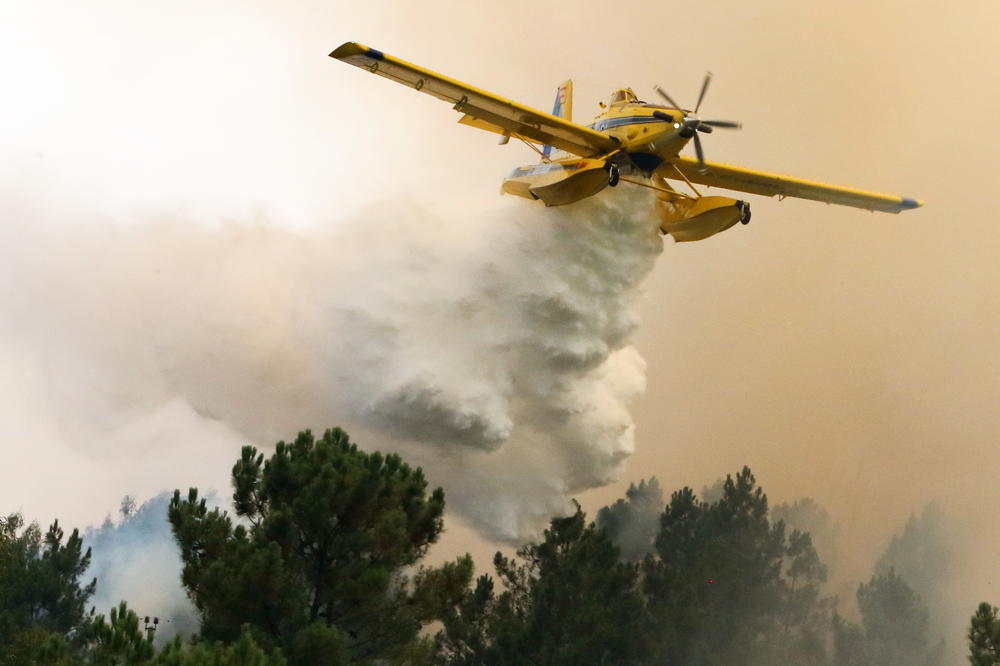 Forest fires are a spontaneous and uncontrolled spread of fire in nature, and in 90% of cases the cause of fires is the human factor, whether it was done intentionally or through negligence.
Hence, at one point, a series of fires can be caused in a larger area that is difficult to overcome, no matter how technically and technically prepared a country is to deal with crises. This usually happens in the summer and is a phenomenon from which no country in the world is spared and there is no formula according to which fires can be extinguished immediately and one hundred percent successfully. If it were, it would not be one of the most terrible natural disasters.
Fifteen fires were raging in Macedonia these days, most of which were brought under control in a relatively short time, with or without air support. The damage is great, but fortunately there are no casualties.
An unnecessarily panicked atmosphere was created in the public, but also in some of the media, that the fires were left to burn spontaneously, that the state was not taking any action and that the citizens and the local population were left alone.
Such defeatism becomes typical for the mentality of our people, which underestimates, disavows all the efforts made by hundreds, if not thousands of active participants in extinguishing fires, including of course the local population, the services of the competent institutions, firefighters, representatives of the ARM, of the police. They are all our people.
But somehow in our national code as if eternal dissatisfaction prevails from everything and everyone, unarticulated hatred, disrespect for the work of others which ends with self-disrespect.
This spirit has long occupied the media, whose comments only further inflamed the atmosphere, and did not contribute to calming the situation, to paying tribute to all those who have invested the maximum in extinguishing the fires.
All the dissatisfaction was directed at the planes that were left in the garages when they were most needed.
It should certainly have its own further media, political or legal solution. But to a large extent such revolt also comes from ignorance of the technology and methodology of dealing with fires, which in turn creates the misconception that firefighting aircraft are omnipotent, that they themselves would immediately put out fires. If so, then we do not need firefighting units, CMC, LDK, local self-government and other entities for that purpose.

Otherwise, the system prescribes exactly how to act at the place where there is a fire. The local self-government unit appears first with its fire brigade, the utility company, the space forces with its own commander and its own chief. This includes volunteers, volunteers for firefighting.
The Protection and Rescue Directorate has 35 branch offices across the country and its units are always where the fire occurs. They assess when aircraft and additional forces from the Protection and Rescue Directorate should be involved and in principle they are involved exclusively in inaccessible places.
The most important thing is to have ground forces, because the fire is not extinguished only by air. Aircraft help prevent the fire from spreading and reduce the intensity of the fire so that ground forces can put it out. This is the function of the aircraft, cutting off the spread of fire and reducing the intensity of the fire.
Macedonia has three ER-Tractor aircraft of American production. Flying tractors are operated by one pilot, but due to the difficult conditions in which they work, there should always be spare pilots. Some time ago, the Government approved funds for training of new pilots, because we have a shortage of pilots and this is not the case only in Macedonia, the pilots of ER tractors are in short supply everywhere in the world.

ER-tractor aircraft have a capacity of 3.104 liters of water and it takes 10 seconds to fully fill the tank, and the aircraft can fly in conditions of high altitude and temperatures up to 49 degrees.
One of the disadvantages of Air Tractors is that they are small aircraft and are sensitive to meteorological conditions, especially strong winds that often limit or completely prevent their use. The second "disadvantage" of ER tractors is that due to standard procedures they do not provide night flying.
And fires do not choose the time and place where and when they will break out, right.
On the other hand, fires know no borders and that is why solidarity and regional assistance are important in overcoming them. It has always been so, and it was so now.
That is why recently in Skopje at the Forum for Regional Cooperation one of the first documents that was signed was the Agreement on Cooperation for Disaster Protection and Rescue.

Pujdemon will attend the hearing in Sardinia

A train derailed in Montana, killing at least three people

Michelle called on Kurti and Vucic to reduce tensions