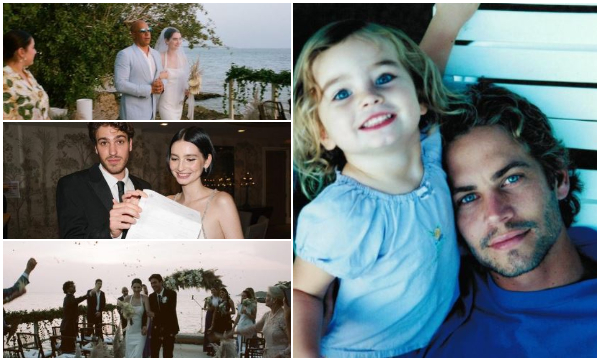 Actor Vin Diesel was part of Meadow Walker's wedding day and took her to the altar to replace her father Paul Walker, who died in a horrific accident eight years ago.

Vin Diesel and Paul were best friends. Meadow posted videos and photos of the beautiful wedding on his Instagram account. Her announcement saddened many fans of the movie "Fast and the Furious".

"This is so emotional. The fact that Vin leads you to the altar made me cry", Wrote one of her followers under the announcement. „Paul is proud and very happy"Was another comment.

Recall, Meadow Walker was 14 years old when she lost her father. That was during the filming of the seventh installment of the franchise, and the film was completed with the help of his brothers Cody and Caleb and using special technology.

"When the tragedy happened in 2013, we stopped filming for five months," Vin said, explaining that the film studio had accepted their decision to have Paul Walker as a mythology: "However, we started this franchise together, with which our fraternity began. "Our fraternity will outlive this franchise," he said.

"I have no friends, I have a family," Diesel once said.

When the news of Paul Walker's death spread, Vin Diesel immediately went to the scene of the accident. He was there almost all night. He lost his brother.

They were so close that Vin became the godfather of Walker's daughter, Meadow, the one he took to the altar instead of his friend. "Fast and Furious 7" ended with a scene honoring Paul Walker.