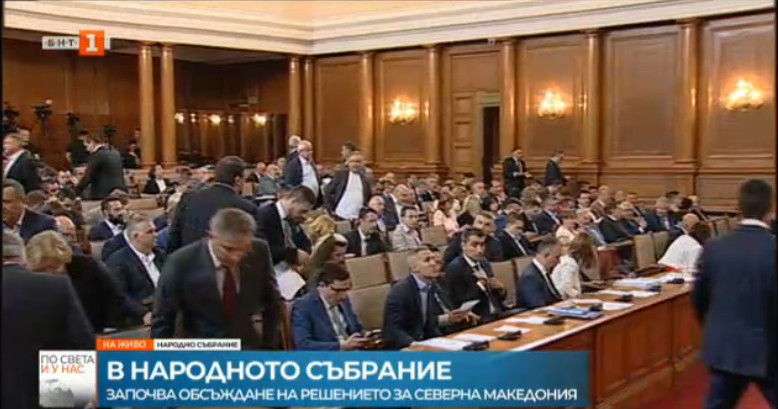 Session of the National Assembly of Bulgaria / Photo: Screenshot / BNT1

Under this headline, the Bulgarian National Television announced today that after two days of unsuccessful regular parliamentary sessions due to lack of quorum, this morning in The National Assembly A sufficient number of MPs applied and the session started at which the first item on the agenda is the proposal for Northern Macedonia.

Practically, the Bulgarian Parliament can give a mandate to the Council of Ministers to approve the negotiating framework proposed by the French Presidency and lift the PCM veto, he points out. BNT.

The conditions for support in the proposal of Democratic Bulgaria are: effective implementation of the neighborhood agreement, guaranteeing the rights of Bulgarians in the RSM by their equal inclusion with other peoples in the Constitution, nothing in the accession process can be interpreted as recognizing the existence of the Macedonian language and European guarantees for meeting Bulgaria's requirements.

At yesterday's session of the Foreign Policy Committee "Revival" and "There is such a people" voted "against" the draft decision, while the BSP abstained. Before agreeing on the DS proposal, the MPs also reviewed the draft decisions of GERB and DPS.

The resigned Bulgarian Prime Minister Kiril Petkov commented late last night in Brussels that he does not expect the National Assembly to make a final decision on the French proposal today.

Macedonian Prime Minister Dimitar Kovacevski yesterday after the EU-Western Balkans Summit in Brussels rejected the French proposal offered by Paris to resolve the dispute with Bulgaria.

- The proposal of the French Presidency to unblock our European path in this form, as it is at the moment, is unacceptable for me, the President, the Government, the coalition partners and the citizens of Northern Macedonia, said Prime Minister Dimitar Kovacevski at the joint press conference with Serbian President Aleksandar Vucic and Albanian Prime Minister Edi Rama.

USA: China's moves in the Taiwan Strait are provocative and irresponsible

Zelensky: Amnesty International is silent about the nuclear terror of the Russian army

The last day of Chinese military exercises near Taiwan