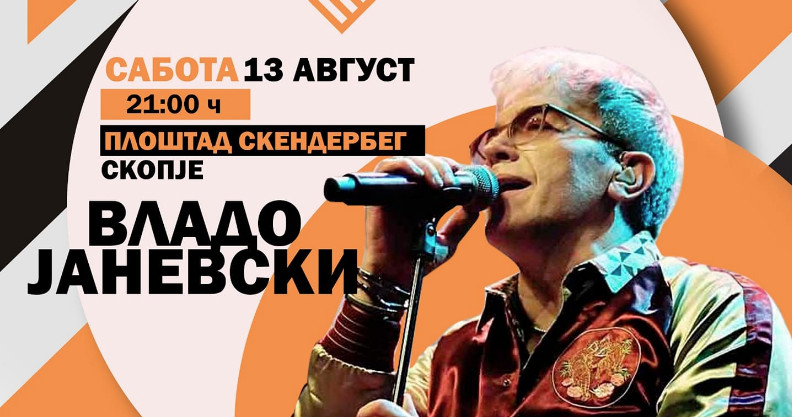 The Macedonian pop singer Vlado Janevski canceled his performance at the Peace Festival, dedicated to the 21st anniversary of the signing of the Framework Agreement. Namely, Janevski was announced as one of several domestic and foreign music stars who will perform on August 13 at Skanderbeg Square.

Today, the singer's management team made an official announcement on social media that the singer will not perform one day after the announcement that Janevski will be part of the music program at the Peace Festival.

"Vlado Janevski is not performing at the celebration held on August 13.08.2022, XNUMX at Skenderbeg Square in Skopje" - it is stated in the official announcement.

Yesterday, the Ministry of Political System, which is the organizer of the festival, announced the performance of the singer Vlado Janevski on their official Facebook page.

"The first edition of the festival, which strives to become traditional, will be held at Skenderbeg Square in Skopje with the performance of famous musical stars, including Vlado Janevski", they announced from there.

Janevski was announced after Antonia Gigovska canceled her performance because, as the young singer stated in the announcement, "she does not want to be part of manifestations related to politics."

PHOTO | "Cathedral of Waste": One of the strangest tourist attractions in the world

A side dish for countless dishes: A simple recipe for the most delicious roasted carrots

Why do pregnant women have memory problems?

VIDEO | Tito knew what he had to buy: This is what the luxury villa in New York looks like, sold for 50 million dollars