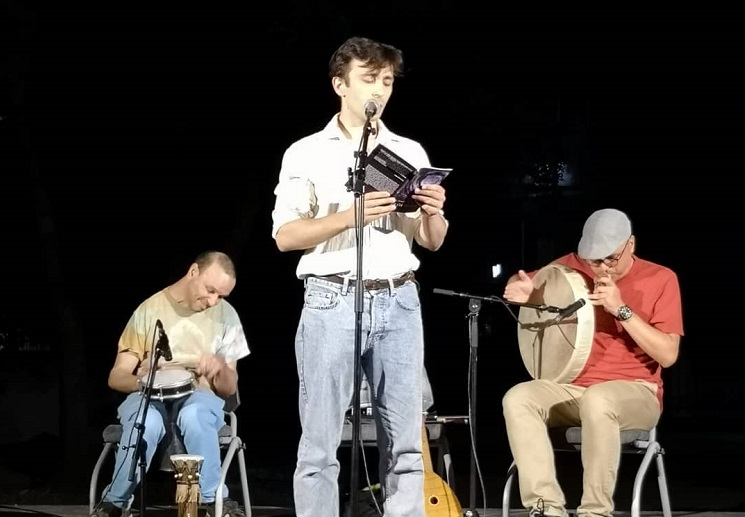 The promotion of the book "Sword of Dreams", the first collection of poems by Dime Danov, published by "PNV Publications", took place on July 5 on the plateau in front of MKC in Skopje. The publication is supported by the Ministry of Culture.

- Specific and enigmatic, socially engaged, mystical and urban at the same time, at times archaic, at times modern, Dime Danov skillfully builds his poetic world. In his literary porch he offers us words that he has previously carefully and carefully prepared in compositions reminiscent of coded torn memories of life, leaves keys-symbols that determine the exact energy flight through tradition, his personalized customs and rituals, paths and the neighborhood in which he grew up. , his grandfather's strong hands, the pastime and the transition, the transmigration in the present, in the moment now and here, where everything is different.

These sketches for a lifetime are advertised through the poetic channels of the universe, they rustle like a new source in the poetic mountain, this poetic letter sticks to the throat, forms a special and unique sense of cognition and leaves a trace in our existence - notes the poet Mitko Gogov.

Literary translation by Artconekt: A magical Swedish story with a model of reality

The book Hannah's Suitcase educates children about the Holocaust

Goten published the novel "Gypsy, but the most beautiful" by Kristijan Novak

Interview with the sculptor Жarko Baшеeski: I approached the man from a sociological and psychological aspect

Theatrical review: Man is the result of his desires and passions

Authenticity is the main feature of the documentary theater, says the young actor Ismet баabanovi иста