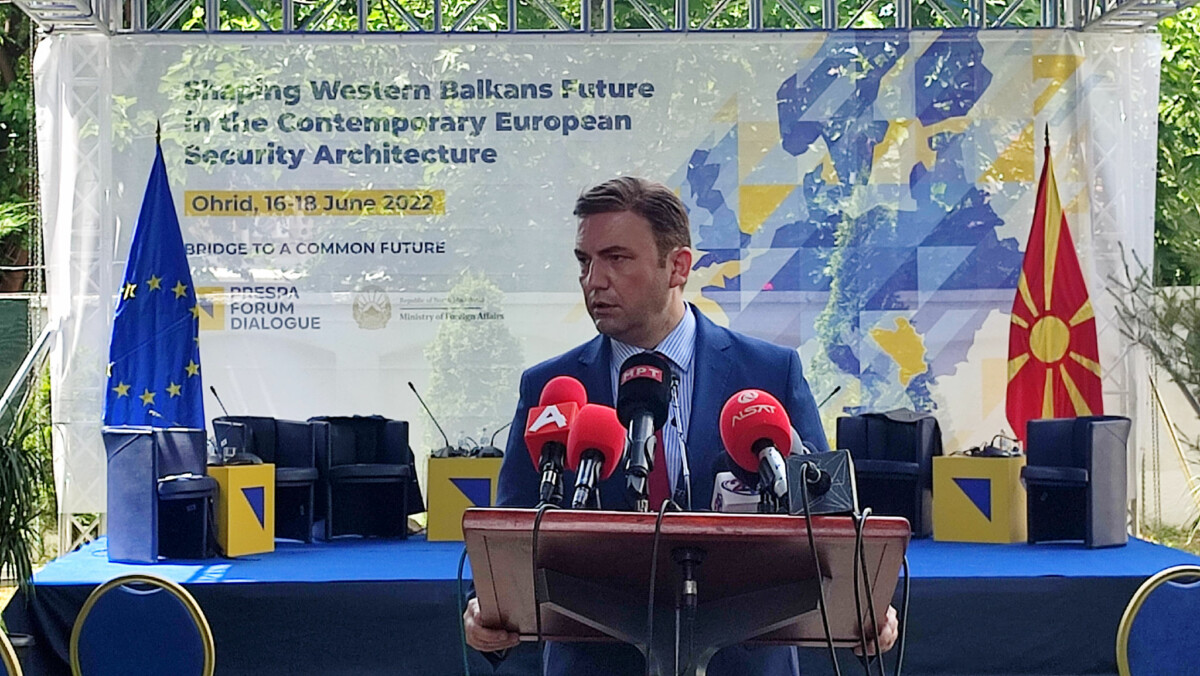 The beginning of the accession process for Northern Macedonia and Albania next month, and thus the recognition of the consistent efforts of both countries on the road to European integration, demanded yesterday Foreign Minister Bujar Osmani, who noted that it will be a joint engagement to create a stronger and more secure Europe, resistant to any third party influences.

Greek Foreign Minister Nikos Dendias also called for an immediate start to negotiations with the two countries. and full support for the European perspective of the Western Balkans.

- We demand immediate opening of the EU membership negotiations of Northern Macedonia and Albania and call on all efforts to advance the EU candidate status of Bosnia and Herzegovina and Kosovo and support progress in the negotiations on Montenegro and Serbia and wish and We are working to create a sustainable and meaningful relationship with Ukraine, Moldova and Georgia, said Osmani yesterday in his address at the opening of the panel discussion "Road to Brussels".

Osmani, who yesterday in Skopje had a meeting with Greek Foreign Minister Nikos Dendias, noted that the stalled integration processes for Northern Macedonia are a source of systemic vulnerability, the effects of which spill over the entire region.

- We sincerely believe that these are historical times that require firm and timely decisions. It is imperative to start the long-delayed accession process of Northern Macedonia and Albania now in June, during the French EU presidency. When, if not now, stressed Osmani.

He also referred to the idea of ​​French President Emmanuel Macron, emphasizing that it is still an initiative in its infancy and there is no written document explaining the details, but that from talks with all representatives of the countries advocating the idea is that it is not an alternative.

- What all stakeholders involved in the development of this idea say is that it is not an alternative to the accession process in which the Western Balkan countries have entered in the last 20 years, but is a new initiative for political convergence in the EU continent. without affecting and being a replacement for what we have here, said Osmani.

Regarding the negotiations with Sofia, he said that they continue constructively in finding a mutually acceptable solution, but noted that so far there is nothing new.

- The two prime ministers encouraged us to continue the talks and based on that mandate we will continue, but so far there is nothing new and different from what we have discussed so far. As soon as we have, we will inform you, said Osmani. He reminded that Dimitar Kovacevski and Kiril Petkov met three days ago in Rome and sent a message to continue the dialogue to find a mutually acceptable solution.

- I can not comment on the internal dynamics in Bulgaria. "What is important for us is that we have a position here on those issues, which we now continue to communicate, and I hope that it will bear fruit," said Osmani.

Greek Minister Dendias, for his part, said yesterday in Skopje that his country supports the European perspective of Northern Macedonia and that his visit to Skopje is to show that they are "together with us on the road to Europe."

"We believe that we are your close ally, we will make appropriate efforts to improve relations between our countries at the bilateral level and this is supported by the Action Plan adopted by the first Supreme Cooperation Council," Dendias said, emphasizing that Greece is committed faithfully. and proper implementation of the Prespa Agreement.

Osmani, on the other hand, at a joint press conference with Dendias, said that the start of negotiations with Northern Macedonia and Albania is the best way to restore European credibility in the region, and that in this regard he is glad that we have the full support of Greece.

Deputy Prime Minister for European Affairs Bojan Maricic last night in an interview with "Click Plus" on TV 21 said that it should be made clear that the start of negotiations is a strategic interest for the European Union, not only for us.

The Deputy Prime Minister assessed that the Portuguese proposal is acceptable to us and something that Northern Macedonia considered to be a fair solution.

While the prime ministers of northern Macedonia and Bulgaria encourage the resumption of dialogue, there is no unanimity on the Bulgarian political scene regarding the dispute with Skopje, according to officials.

Bulgarian Prime Minister Petkov asked President Rumen Radev to convene the National Security Consultative Council on the dispute with Northern Macedonia, but Radev replied that in order to do so, he first wanted to hear his position on Northern Macedonia.

- The National Security Consultative Council is a body to assist in dialogue and to seek a common solution to important national issues. Regarding the Republic of Northern Macedonia, not only is there a broad consensus, but it is strongly expressed. The authorities need to be clear about this. "If the dialogue in the ruling coalition itself is disrupted, it should be clearly stated and the reasons for that should be indicated," Radev said earlier this week.

Bulgarian MEP and EP rapporteur for the country, Ilhan Kucuk, also spoke yesterday about the lack of a clear national position in Bulgaria.

- Bulgaria has nothing to worry about, at least to try to avoid an honest, open conversation with Northern Macedonia - both about the past and the future. But it is obvious that from a national point of view we do not have a clearly expressed position at the level of government. If this Government is to be criticized with argument - it is the inability to reach a consensus on key issues. One of them is Northern Macedonia, the other is the attitude towards Ukraine, comments Kucuk.

The MEP added that it is illogical and difficult to explain the thesis that we will release Albania, and for Northern Macedonia we will look at the issue from a historical perspective.

- This thesis is very difficult to explain. Europe has a hard time understanding tangled historical talk, because it has to open a Pandora's box for its own history, and it does not want to do that. But Europe understands human rights and freedoms very well. That is why it is fair for the Bulgarians in Northern Macedonia to be an integral part of the Macedonian Constitution, Kucuk told BNR.

He says that there is increased and legitimate pressure from European institutions to resolve the issue with Northern Macedonia and that enlargement is a key priority of this European Commission.

NSDP on the French proposal: Not to be used for petty political scoring

VMRO-People's Party: The French proposal is by far the best in the last few years

Maricic for MIA: With the modified French proposal, we get what we have been fighting for for years

At GP Tabanovce for entry into RS Macedonia, the wait is about an hour, at GP Bogorodica for exit about 40 minutes

The session of the Security Council has started, the French proposal will be discussed