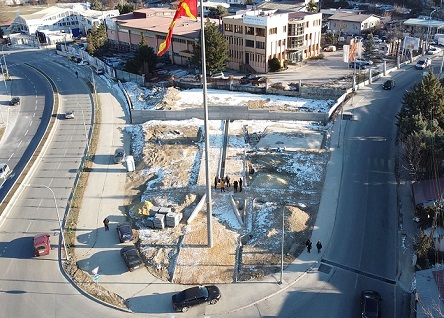 Photovoltaics will be used for lighting, and a self-irrigation system will be installed for green areas.

The park "Idnina" in the Municipality of Kisela Voda which is currently being built at the roundabout between Pripor and Kisela Voda will be self-sustaining, announced the Skopje municipality.

- Following the latest world trends, the park, which bears a symbolic name, "Future", will be self-sustaining. Photovoltaics will be used for lighting, and a self-irrigation system will be installed for the green areas - inform from the Municipality of Kisela Voda, where they explain that the field works are going smoothly and the construction of the park is in an advanced stage.

Namely, the field is working on improving the space that covers an area of ​​4.000 m2, which, according to the announcements, after the finalization of the project, will offer a variety of content for all generations.

In addition to greenery, trees, horticultural landscaping, the park will have urban equipment, benches, gazebo, walking paths, water wall, and a playground will be built for the youngest. At the entrance, the Macedonian flag will be placed on the mast.

- The promises from the pre-election campaign are an obligation for me. Next to the roundabout near Pripor, from a messy and unlit space, from a landfill because of which everyone turned their heads away, this spring the citizens will get a beautiful urban corner for rest, recreation and socializing. We were careful to provide content for all generations, while maintaining the new park to use renewable energy sources, which saves and protects the environment. "Idnina" Park is a response to the needs and demands of our residents. As one of the first realized projects and fulfilled promises, it will be a symbol of the future that we promised to our fellow citizens - said Mayor Orce Gjorgjievski.