The opposition is calling for a front to overthrow the government 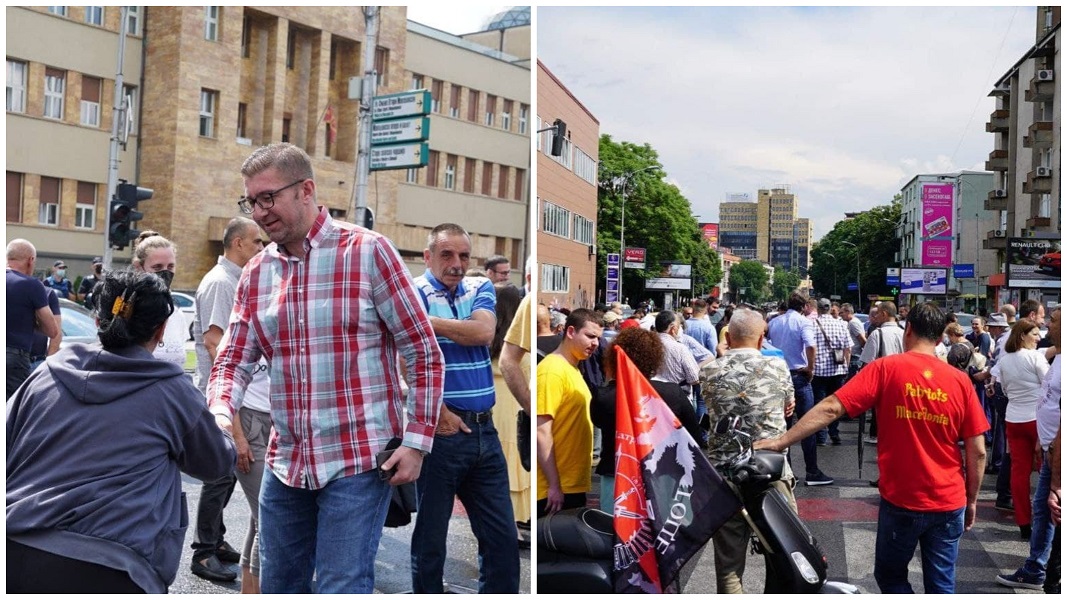 We will see if the leader of the opposition will have the capacity to attract a mass of people, outside the faithful and traditional party activists from the municipal committees, says political scientist Blagojce Atanasoski. Political analyst Marko Trosanovski, on the other hand, believes that the elections are not a solution to overcome several crises, but the formation of a technical or expert government.

If the president of the opposition VMRO-DPMNE Hristijan Mickoski succeed on the big one protest for overthrowing the Government of Dimitar Kovacevski, announced for June 18, to create opposition front behind which the citizens would stand, it is possible to provoke early parliamentary elections, consider some political scientists. According to others, the solution to the problems is in forming a technical or expert government, because early elections would add a new crisis to the country.

The more massive the protest, the greater the pressure on the government to accept early parliamentary elections, says the political scientist Blagojce Atanasoski.

- We will see if the leader of the opposition will have the capacity to attract a mass of people, outside the faithful and traditional party activists from the municipal committees. That is, the more massive the protest, the greater the pressure on the government to accept the thrown glove by the opposition leader for organizing early parliamentary elections. It will all depend on the endurance factor of the protests because summer is coming. The opposition front, which would be created as a non-partisan civic movement, should accumulate all dissatisfied structures in government, regardless of party affiliation, ethnic-religious and social - says Atanasoski.

As for whether the opposition is riding the wave of union dissatisfaction and protests, Atanasoski believes that they were partially coordinated by the top of VMRO-DPMNE.

- As for whether VMRO-DPMNE is sticking to the previous union protests, I personally think that they were partially coordinated, encouraged and instructed by the top party leadership of the opposition with the union leaders who incline to their political option, all in order to create - a precursor to dissatisfaction with what today the opposition announces as a "blockade of parliament" and mass protests in the future - says Atanasoski.

The political analyst Marko Troshanovski, on the other hand, he believes that the elections are not a solution to overcome several crises, but the formation of a technical or expert government.

- The several crises that we are experiencing in parallel, inevitably cause great frustration among the citizens and they are justifiably attributed to the government, although in large numbers they are imported. It is politically opportune for the opposition to create points of such dissatisfaction, but I think that early parliamentary elections are not a solution to the problems but the addition of another crisis. If the public interest is the main goal, then an expert or technical government is a much more appropriate solution that would bring together the best human resources the country has. A big rally is a legitimate way to show dissatisfaction, but I do not believe that all the procedures that block the normal running of the processes in the institutions will contribute to improving the situation - says Trosanovski.

Mucunski: Silence is not an option

In addition to the active blockade of the Assembly that will continue, the Executive Committee of VMRO-DPMNE last night decided on June 18 to hold a large protest to overthrow the Government under the motto "Protest for change", and new measures are possible.

The Vice President of VMRO-DPMNE Timcho Mucinski, said after the EC meeting that the only way out of the extremely difficult situation is to hold early parliamentary elections.

- We lend a hand and send a message for unification of the oppressed, the poor, the businessmen, the educators, the doctors, the professors, the farmers. The oppressed people of Macedonia. Silence is not an option. Protest for change and a better life. It is too much, this is a protest for change - said Mucunski.

The decision to protest, he said, is due to the absence of any readiness of the Prime Minister and the ruling party to establish a normal political dialogue with the opposition and at least a minimum of state unity for VMRO-DPMNE's demands to find appropriate solutions to the crisis in the country.

- The protest is obviously forced and more than necessary and that is why we call on all citizens to join us and to announce in one voice that they are the ones who give and take away trust - added Mucunski.

It is uncertain whether opposition parties from the Albanian political bloc will stand behind the protest. According to the president of the Alliance for Albanians, Zijadin Sela, early elections in October are an option if negotiations with the EU do not start in June. In a statement for TV21, Sela said that in such a case, the Government loses its full credibility and elections will be held in October.

According to SDSM, Mickoski decided to protest because his attempt to block the Assembly failed.

- The active blockade has expired, so from the unprecedented steps announced by Hristijan Mickoski, he only has to organize a protest for a month from now. The fact that Mickoski needs a whole month to organize a protest, speaks enough about the problems he has to keep the seat in the headquarters of VMRO-DPMNE. Protest is a democratic and constitutionally guaranteed right, but the issue of elections is closed. There will be parliamentary elections in 2024 and VMRO-DPMNE and Mickoski will be defeated, and before that, they will lose the regular presidential elections, also in 2024 - say from SDSM.

The Macedonian government is waiting for a different proposal from Macron

In a police action, 12 wood thieves were detained in Struga

NSP: In the midst of an economic crisis, the Ministry of Interior is introducing eight-hour shifts

Two smugglers of migrants from Bitola were detained