The Olympics, the athletes and the problems of inclusion: I want to cry, guys, you do not understand what I went through this year! 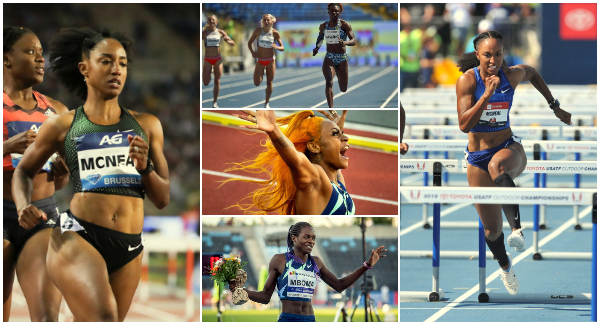 The numerous disqualifications of Olympic athletes for breaking the rules is the right time to ask ourselves if it is time to change something.

Brianna McNeill, the 2016 Olympic 100m hurdles champion who qualified with the US team last month, would never think of telling anyone but her husband and, as she later explained, her spiritual advisor, about the abortion she had in January 2020. Certainly McNeil did not want to share the sad story of her life with the World Athletics Association, much less with public opinion. When interviewed after the Olympics, she said: "At this moment I want to cry. Guys, you do not understand what I went through this year. "I am just very upset."

I was punished for the important decision I made - abortion

McNeil, 9, was suspended for five years for doping violations after failing an anti-doping test two days after the abortion. The young athlete justified herself by saying that she was in bed recovering from an abortion at the time, and that she did not hear that the anti-doping officer had arrived at the front door of her Northridge home. In two other interviews, McNeill repeated the story, emphasizing how he felt "forced to disclose personal information" to fight the ban and justify his name. Her lawyer failed to convince the Swiss Sports Arbitration Court, which upheld her five-year suspension in a July 13 ruling, meaning McNeil would have no chance of defending his Olympic title and will miss the next two Summer Games. The court added another sentence, so McNeil was disqualified from all competitions from February 14 to August 2020, XNUMX and should give up all medals, prizes and money won during that period. Speaking to sports anti-doping authorities, the American champion said: "They say they protect pure athletes, but I do not feel protected at all. "I feel like I was condemned for my very important decision I made and it really affected my life forever."

Sprinter with a sincere sigh: Well, I'm a man!

But the stories of athletes eliminated at the last minute before the Olympics are numerous. Last week, the list also included the sensational Sha Kari Richardson, a favorite for gold, this time not because of her incredible speed, but because she was positive for marijuana. The World Anti-Doping Agency bans the use of cannabinoids because it considers them to be dangerous for athletes and that by taking cannabinoids they do not adhere to the "sports spirit", but also that they can provide "performance improvements" for some athletes. (Although in-depth research is needed, a 2017 academic review found that THC - Tetrahydrocannabinol, a major psychoactive ingredient in cannabis, does not improve aerobic performance.) Sha Kari Richardson's first words were: Twitter. The sprinter therefore has no intention of looking for excuses. She just wants to prove that the substance use took place long before the competition and that it did not give her any competitive advantage.

Recently, Christine Mboma and Beatrice Masilingi, two 18-year-old Namibian athletes, were excluded from the 400-meter dash at the Olympics because, according to the Namibian National Olympic Committee, their natural testosterone levels were considered too high. This ruling is based on the World Athletics' controversial policy towards athletes with diversity in sexual development (DSD), which requires that the testosterone levels of all female competitors fall below a certain level if they participate in certain competitions. This rule does not apply to male athletes.

One week earlier, US transgender racer Cese Telfer had been suspended from the US Athletics Championships because the 400-meter hurdles competitor failed to meet World Athletics guidelines for acceptable testosterone levels. Telfer is the first transgender woman to win an NCAA title. As an athletic student at Franklin Pierce University, Telfer first competed in the men's competition from 2016 to 2017, but after starting her transition to becoming a woman, she was allowed to compete in the women's competition.

For men, however, higher-than-average natural testosterone is a competitive advantage, while for women it is a threat to their careers.

This new wave of disqualification tells us that some of the current rules of sporting competition have a major and unfair effect on women, especially African American and female athletes who do not fit into the arbitrary definition of the gender of World Athletics. In addition, it is really time to make sports accessible and inclusive for everyone, including those who do not meet the prescribed gender norms. It is time to give support to athletes who are pregnant or trying to conceive, who are mothers who are breastfeeding, who have had an abortion or who are seeking reproductive care. It is time to give priority to the mental health of all racing players, as a top priority. It's time to do some math. As we celebrate the Olympic Games with the highest participation of women, like the ones in Tokyo, however, let us not forget those who did not have the opportunity to arrive, for perhaps not entirely reasonable reasons.

Spirovski: We are going in the right direction to do something big again and Macedonia to play in a big competition

Bizarre funeral car ad - "Do not get vaccinated"

The document, which the municipality of Tetovo claims is not competent, is on its website

Brooklyn is preparing new contracts for Harden and Irving

The mother revealed where Ronaldo will end his career: Cristiano must go back there, he will do it for me