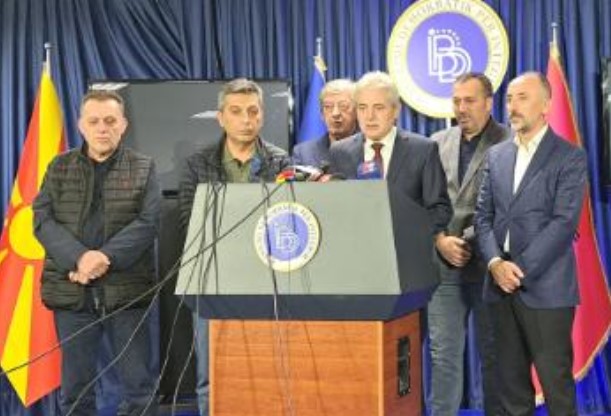 The comments in the circles close to Grubi, on the other hand, are that Ahmeti did not give in, the "firemen" did not gain anything, because they were wrong and that it is not important who won the battle, but who will win the war

The "Fire", led by Izet Majiti, Moussa Xhaferi, Blerim Bejeti, Nevzat Beita and Sadula Duraku, won the first battle of the meeting with the leader of DUI Ali Ahmeti. They say in a briefing for "Sloboden Pechat" that after the battle won, they are preparing for the second round - the establishment of the Central Presidency, scheduled for October 15, and the removal of the first vice-prime minister Artan Grubi, or, as they say, "the new Thaci is not place in the Government".

The comments of those close to Grubi, on the other hand, are that Ahmeti didn't give in, the "firemen" didn't get anything, because they were wrong and that it doesn't matter who won the battle, but the war.

The six-hour meeting in Mala Recica was painful and difficult, and Ahmeti gave the most resistance when it came to replacing Grubi and other ministers, the "firemen" brief. The DUI leader was angry, because he perceives the insistence on Grubi's dismissal as an ultimatum, that he does not know how to manage personnel and that the "fiery" party misunderstandings were brought to the public stage. Here the talks stalled, and half of the meeting was spent on replacing Grubi and other ministers.

Ahmeti's statement after the meeting - that the debate returned to the party, which was one of the key demands of the rebels, is a confirmation that the "fiery" won the first round.

- Today we had a conversation with long-term collaborators, with whom I have been involved in many important processes, in many successes. We talked and essentially the debate is back inside the party. On October 15, there will be a Central Assembly, where the political situation will be discussed, but also the new presidency will be elected, and immediately, on the same day, the new presidency will return to the DUI headquarters where, among other things, the political situation will be discussed situation and there will be a report from the government composition of DUI - said Ahmeti.

Formation of the party bodies, that is, the Central Presidency, as well as the report of the ministers on the work done, were also demands of the "firemen", which Ahmeti accepted.

"Fire" say that the battle is not over and that they are now preparing for the second half, i.e. for the replacement of Grubi. They say that they pointed out to Ahmeti that all decisions should be made in the party bodies, not individually.

- Grubi and other ministers are not parties to the talks. They do not make political and organizational decisions, because they do not have the support of the base. They will answer professionally, because they were appointed to the positions without passing through the party authorities and have no legitimacy. They will report to the Central Presidency on the work done in the past at least two years. We will hear what they did, what are the mistakes. We remain on the request to replace Grubi. The new Thaci has no place in the Government - say the "firemen".

According to them, the "second round" will be more intense. The political fight with arguments will continue and the report of the ministers will last for two days if necessary, but there must be a decision who will stay at "Ilindenska".

Apart from the Central presidency, on October 15 they expect that the new vice-presidents will be elected, as well as the organizational and general secretary of the party.

On the other hand, both Ahmeti and those close to Grubi discount the conclusions from the meeting with the "firemen". Ahmeti assessed that "there was no fire", nor "fire group" and that the party debate will continue.

– No fire, no flame, the hallmark of DUI is that there has never been an effort to extinguish, suppress, or wage war against divergent thinking. On the contrary, by respecting it, we have reached the right decisions. There is no fire, there won't be any - said Ahmeti.

Mejiti, on the other hand, said that he was satisfied with the meeting, while about the requested replacement of the Vice Prime Minister, Grubi said that the debate on their demands will continue.

- The debate will return to the DUI, the authorities will decide what to do next with our requests - said Majiti.

- Even before the "firemen" asked, Ahmeti was planning the election of the Central Presidency. They lined up again behind Ahmeti, the leader did not give in, and they did not replace a single minister - they say in defense of Ahmeti.