They arrived from Macedonia with diapers full of gold, they were left in Preševo ​​without jewelry and without a car 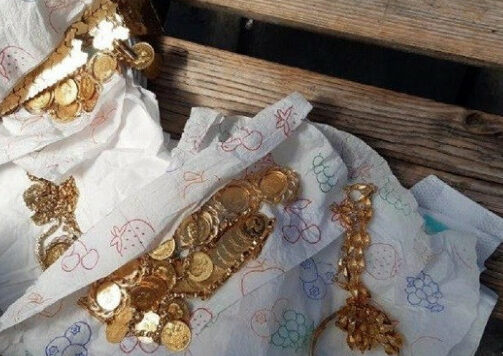 Two passengers at the Preševo ​​border crossing tried to smuggle gold jewelry worth more than 2,2 million dinars across the Serbian border in diapers, the Customs Administration of Serbia announced.

Customs officials discovered the offense when a Volkswagen Passat car with Swiss license plates, with which a young married couple was traveling from the direction of Macedonia to Switzerland, was singled out for a detailed inspection at the entrance to the Preševo ​​border crossing.

Although they said they had nothing to report, the customs officer, during the inspection of the car, found a bag in front of the passenger seat, which contained, among other things, an unopened package of diapers.

The unusual weight of the diaper packaging led to suspicions that something was hidden inside, which soon proved to be true, as several pounds of gold necklaces and bracelets with "Franz Joseph" ducats, as well as chains and rings, were discovered in several diapers.

Sabotage or just theft: Stolen cable from a locomotive, no longer in running condition

Drama in a betting shop in Drachevo, two people got into a fight, the employee was injured

A woman was injured in an accident in a parking lot in Skopje, in which a Ukrainian diplomatic vehicle also took part

Detained boy and girl robbers in the area of ​​Bit Pazar

Ramadani, a young man from Kumanovo, whose body was recovered from Vardar, has been identified