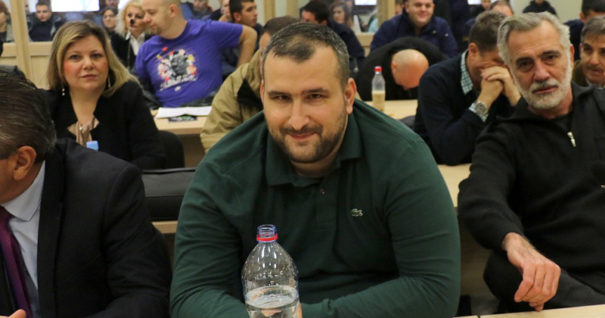 Convicted to a low sentence for the break-in in the Assembly that happened on April 27, Aleksandar Vasilevski – Ninja, admitted before the court that he helped the escape of the former intelligence officers, Goran Grujevski и Nikola Boskoski, who have been convicted in the mass wiretapping case.

From the Criminal Court for "Фокус" they say that Ninja was sentenced to six months in prison after pleading guilty, i.e. admitting that he committed the crime of "assisting a perpetrator in the commission of a crime", without revealing more details.

Ninja was initially sentenced to eight years in prison, although for the offense for which he was tried, the minimum sentence is ten years. An appeal later reduced his sentence to seven years. He was a key witness in the trial for the April 27 break into the Assembly, and the opposition alleged that the entire charge was based on his testimony.

At the trial on April 27, he claimed to be a man of the secret police, brought in by Grujevski and Boskoski, although he was never employed by the services. He also claimed that after the break-in in the Assembly, under the pressure of Grujevski, he escaped, but despite the fact that he convinced him not to surrender, he decided to call the police himself.

Goran Grujevski and Nikola Boshkoski escaped to Greece, and the Supreme Court there decided not to extradite them to Macedonia because of the pardon they received from the former president, Gjorge Ivanov, which was annulled in Macedonia.

Quality healthcare is an investment in human capital

Tetovo is "the most famous Illyrian-Albanian city in the world," writer Kadare said after being named an honorary citizen

A foreign investor will save Popova Shapka, which the state forgot a long time ago

Kostadinovska-Stojchevska: Every politician bears responsibility for what he declares