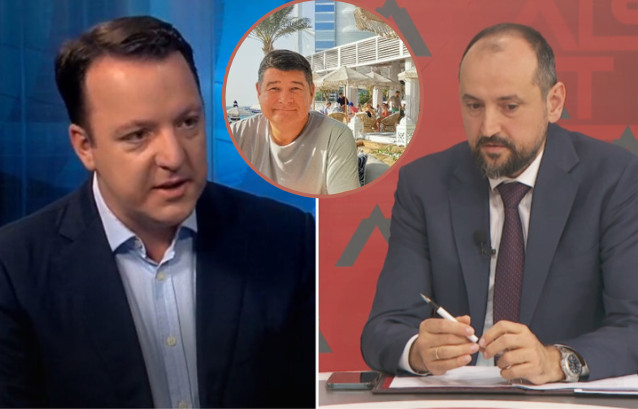 Nikoloski pointed to Bitici as a negotiator with Onishchenko/Photo collage: Free Press

After the accusations of VMRO-DPMNE vice-president Aleksandar Nikoloski to the address of the vice-prime minister for economic affairs Fatmir Bitiqi that he tried to contact the oligarch Oleksandr Onishchenko for the sake of economic engagement in Macedonia, Bitiqi's office only received a short comment for Thelma "the claims are not true ".

Yesterday, in an interview for 360 Degrees, Nikoloski expressed his suspicion that Onishchenko was not called to Macedonia only for the purpose of developing the equestrian sport and placing the Macedonian equestrian team at the Olympic Games, but the case is much deeper and demanded responsibility from the authorities.

- I think that the prime minister should also take responsibility here. It has not yet been made public, let me put it, there are credible information or rumors that one of the ministers in the government, to be more precise, the vice president of the government - vice prime minister in charge of economic affairs, was trying to contact this person and make economic arrangements with him. It is not just that someone who rode a horse came to Macedonia and took citizenship to compete in the Olympics, but it is a much deeper case, said Nikoloski.

Himself Onishchenko, in an interview with "Free Press" yesterday he claimed that he never planned a gas business in Macedonia nor did he negotiate with politicians for such a business, but wanted to buy a bank, an idea that he will not realize if his citizenship is revoked.

- I am not interested in any energy business. I had some plans to buy a bank in Macedonia, but I won't, if things continue like this. I now deal only with financial business, I no longer deal with the energy business, says Onishchenko for "Sloboden Pechat".

This was confirmed today the owner of the equestrian club Dona, Vlatko Stefanovski – Ramce also in an interview with "Sloboden Pechat", which claims that Onishchenko had a desire to buy a bank and inquired about it through lawyers and lawyers, but did not negotiate with anyone about it, why he only traveled to Skopje three times and met only with him.

- I was with him all the time. I most responsibly claim that I neither know Zaev, nor have I seen Zaev, nor have I talked to Zaev, nor have I ever met Zaev in my life. He neither met with officials from the party, nor does he have a gas company in Macedonia, and that was not his plan to operate. I don't know where they got that idea from. If Onishchenko or I met Zaev, why did Onishchenko wait two years to get citizenship? That doesn't make sense. Onishchenko was given it after two years, Stefanovski said in an interview with "Sloboden Pechat".

And himself Onishchenko for "Free Press" claimed that he did not meet politicians in Macedonia.

Two members of the National Security Agency, which are part of the department for strategic cooperation, have been suspended due to the case of Ukrainian businessman Oleksandr Onishchenko, who received Macedonian citizenship even though he was blacklisted in the United States due to interference in the election process.

They were also pointed out as being responsible for giving a positive opinion on Onishchenko's Macedonian citizenship the director of ANB Viktor Dimovski after he left the session of the parliamentary committee for supervision of the work of the ANB and stressed that the reasons for doing so are not known for the time being.

- We still have to determine whether it is an omission or an intention, or whether it is some kind of lucrative interest, none of this is excluded and my first interest is to find that out, Dimovski told reporters.

Today Prime Minister Kovacevski called on the Parliamentary Commission for Oversight of the work of the National Security Agency (NSA) for the "Onishchenko" case to finally hold a meeting on this case, and at the same time the Ministry of Internal Affairs to quickly complete the investigation regarding how the closed session took place of the Parliamentary Commission to be broadcast live.

The work in the parliamentary commission came to a halt precisely after the discovery that a broadcast from the closed session appeared on YouTube without authorization, and the summoned director of ANB, Viktor Dimovski, denied after the session that his service had something to do with it, stating that the leak was due to the competent parliamentary services. for broadcasts in the legislature.

Otherwise, the government has started a procedure to revoke the citizenship and passport of Oleksandr Onishchenko under Article 14 of the Law on Citizenship, in which it is stated that he provided wrong documents or incorrect information. Due to his expired Ukrainian passport, Onishchenko applied for Macedonian citizenship with the valid Russian passport where it is stated that his personal name is Aleksandar, and after the issuance of Macedonian citizenship, he is listed as Oleksandr Onishchenko in the voter's list, which "Sloboden Pechat" already wrote about.