An infamous anniversary, a year ago Eurostandard Bank failed, many questions remained unanswered 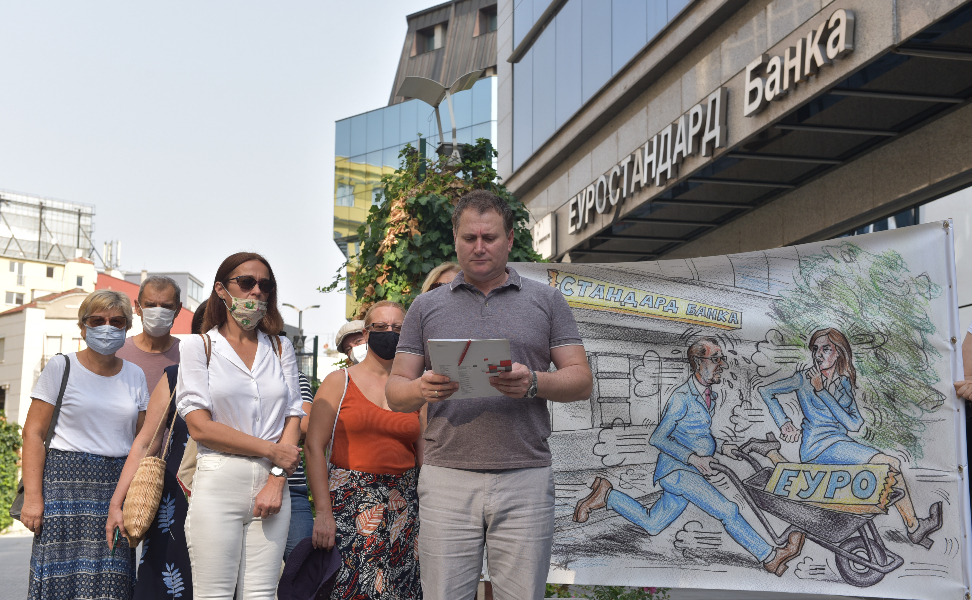 Today, August 12, 2021, fires and dealing with them are relevant. The eyes of the public are also focused on the growing number of coyote-infected and restrictive measures proposed by the Government, which encroach on the fundamental rights and freedoms of citizens. Therefore, we, the depositors damaged by the collapse of Eurostandard Bank, remind on this day that exactly one year ago, on August 12.8.2020, XNUMX, the top topic in all media was the news announced by Governor Anita Angelovska-Bezoska that Eurostandard Bank is going bankrupt, say from the Association of damaged individuals and legal entities of Eurostandard Bank "Justice for depositors".

- It was a black day for more than 700 individuals and over 2000 legal entities, depositors of the bank, today creditors in the bankruptcy procedure. This day meant uncertainty and brought insomnia to more than 3000 families who were left without their own means, without life savings, some even without means of subsistence. The agony for these families has been going on for exactly one year. The agony continues, but the hope and struggle to persevere in the intention to return the funds and punish the perpetrators does not subside. Therefore, on this day, the Association "Savings Justice", which unites the damaged individuals and legal entities from the bankruptcy of Eurostandard Bank, reminds the Macedonian public of this event from a year ago as a sign that the fight continues, but also as a reminder to the authorities that all preconditions have been created for solving this problem, to the satisfaction of all damaged depositors.

Searching for the culprits for their agony, but also for the exit solutions that can mean hope for the return of the funds, the damaged depositors in the past year have taken many activities, measures and concrete procedures to solve the problem. Almost every day, the Association "Savings Justice" is present in the public, reporting on the situation in the bank, poor placements, inadequate control by the competent state institutions, especially the National Bank, suspicions of crime by the bank's management team, inadequate monitoring of cash flow from the institutions in charge of that, emphasizing multiple borrowers where our deposits are given without adequate, somewhere almost without any collateral. Thereby, numerous data and information were presented to the public, which not only were not denied by anyone, but on the contrary, they were most often confirmed and their authenticity verified through official data from competent institutions. Several public protests and press conferences were held in front of several institutions, calling for responsibility and acting in accordance with the authorities. Several public appearances, debates and briefings on current topics related to the situation with Eurostandard Bank have been organized. In the whole situation, only those to whom the calls were most often addressed and who should have been the most zealous - the state bodies that were supposed to intercept the whole situation and take concrete measures to determine responsibility failed. We are still waiting for their action.

The most relevant event in the past year that restores the hope that this fight will not be in vain is the decision of the Constitutional Court of May 25 this year, which repealed Article 163 paragraph 3 of the Law on Banks. According to the expert opinions consulted by our association, this decision must be implemented by the bodies conducting the bankruptcy procedure, in accordance with Article 80 of the Rules of Procedure of the Constitutional Court and the legal opinion of the Supreme Court from October 2019. Therefore, we expect that our question on how to proceed, very soon, after the end of the so-called court vacation, which, incidentally, ends in three days, we will receive an answer. An answer with which the Decision of the Constitutional Court will have to be respected, which will mean that the Deposit Insurance Fund will no longer be able to be a creditor in a bank bankruptcy procedure for the amounts paid on the basis of the insured deposits of individuals. Thus, the natural and legal creditors of Eurostandard Bank will be able to recover their claims from the bankruptcy estate in full, without anyone being harmed. In fact, the creditors have already submitted a reasoned analysis of the consequences caused by the decision of the Constitutional Court on the bankruptcy procedure of Eurostandard Bank with a request from the Court to ascertain the current situation and make a decision confirming that the Fund is no longer a legal creditor and has no right to collection from the bankruptcy estate. Thus, we repeat, the issue of damaged creditors, individuals and legal entities, for collection of their claims from the bankruptcy estate of Eurostandard Bank is completely resolved, which may be a rare example of closing the problem of damaged creditors of a bank without budget funds and without additional engagement of public revenues. Ultimately, this would be not only in accordance with the decision of the Constitutional Court, but also a reflection of the responsibility of the state to its citizens - creditors and their families, in conditions when those same creditors were not protected by the same state, primarily through the attitude of the National Bank, as a highly established state institution, which de facto allowed and possibly participated in the robbery of the bank deposits. To make it clearer to the general public, the damaged individuals and legal entities from Eurostandard Bank do not seek compensation through public funds from the state budget, but for their full compensation there are sufficient funds in the bankruptcy estate of the bank. Only consistent application of the Decision of the Constitutional Court of 25.05.2021 is required for them to receive their own funds.

Therefore, we, the damaged individuals and legal entities from the bankruptcy of Eurostandard Bank, expect a solution. Decision through implementation of the Decision of the Constitutional Court from 25.5.2021 in the Bankruptcy procedure and full payment of the deposits from our funds captured in the Bankruptcy estate of the bank. There are legal presuppositions for that and, at present, sufficient funds on the bank's bankruptcy account. Only the last step is needed, harmonization of the acts adopted in the Bankruptcy procedure with the Decision of the Constitutional Court from 25.5.2021. Therefore, through this press conference, which we hold on the first anniversary of the closure of Eurostandard Bank, we encourage the bodies conducting the bankruptcy proceedings, especially the Basic Civil Court Skopje, to write a new history in the bankruptcy proceedings for the banks and to make a bold decision The captured deposits in the bankruptcy estate of the bank will be returned to their owners depositors - individuals and legal entities. Any other decision would be an additional shipwreck for the judiciary in the country and a confirmation that the rule of law does not live here, stands in their statement.

Bitici: There will be bread at decent prices, it is possible to activate the commodity reserves

Growers from Tikveshko announce a protest, they are dissatisfied with the purchase prices