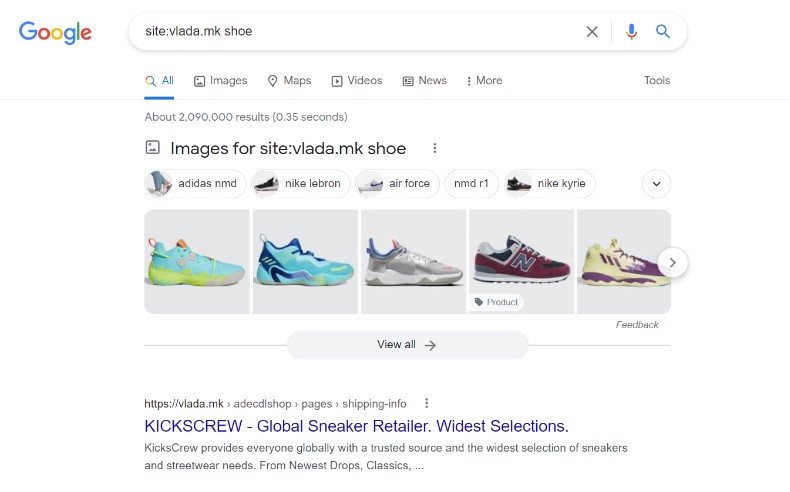 If you search on Google for information related to the official website of the Government of the Republic of North Macedonia - vlada.mk - you will notice that links to famous brand sneakers are displayed: Nike, Yeezy, Adidas, Asics and others, it says IT.mk.

According to the portal, this is an indication that the Macedonian government IT-infrastructure "is experiencing another debacle from the security aspect".

With a slightly more specific search, it can be noted on Google that the site vlada.mk has more than 2.090.000 results related to the keyword "shoe", and the same is true when searching for bags and sports jerseys.

"The sites and links that used the flaws of Vlada.mk and their infrastructure did a great job on the SEO topic and also have good image indexing, so if you are more into visual searches, you can buy a new sneaker by listing the products through Google Image Search - mostly Vlada.mk "resells" sports models, but there are also some classic ones", writes IT.mk.

It is a serious security flaw, that is, there are two possible scenarios in this type of hacking of sites that are mostly automated with scripts and serve to build the reputation of the so-called. backlinks to e-commerce, resale and affiliate sites, the portal adds.

The first is that these are SPAM links generated mostly through the use of the internal search system of the sites, where upon entering a keyword or term, the site's internal search engine also builds a page with a URL for the given link.

The second scenario is that someone somehow gained access to the servers where the Vlada.mk site is hosted and created instances of e-commerce sites overpopulated with a bunch of products that then link to other sites.

From IT.mk they say that the external checks of the situation point more towards the second scenario, but they also note that "in order to be able to reliably confirm what we are talking about, it is necessary to conduct a thorough investigation and check, and the above should be looked at as an educated guess."

The most renowned and popular government site Uslugi.gov.mk had a similar problem when it linked to a Thai e-commerce site, as did ednevnik.edu.mk, which is now mandatory in every school, the portal reminds, adding that some of the disputed links are already inactive, which shows that in the last two days, after the information was published on IT.mk, "someone cleaned the server".