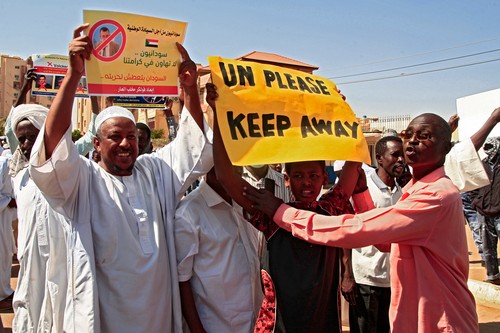 Several thousand people protested in front of the United Nations headquarters in Sudan today, condemning the talks organized under the auspices of the world organization in order to resolve the crisis in the country, which occurred after the military coup, report. the French media.

"We reject foreign interference in the affairs of our country," the protesters said.

The UN office in Sudan offered to receive a delegation of protesters, but they refused.

Pertes announced on January 10 the start of talks between the UN and local actors to "help the Sudanese reach an agreement on overcoming the crisis", following a coup in late October.

Since the beginning of the protests against the military authorities and the coup d'etat on October 25, 77 people have been killed in the demonstrations so far.

The Sudanese army ousted longtime autocratic president Omar al-Bashir more than two years ago, and then formed the prime minister's military-civilian government. Abdala Hamdok. But on October 25 last year, a second coup took place, after which the country is in chaos.

"We will go through Turkey's demands," said Finnish President Ninisto

The ship "Ocean Viking" rescued 158 migrants in the Mediterranean

Scholz is convinced that Sweden and Finland will join NATO

German health minister warns: Coronavirus pandemic is not over