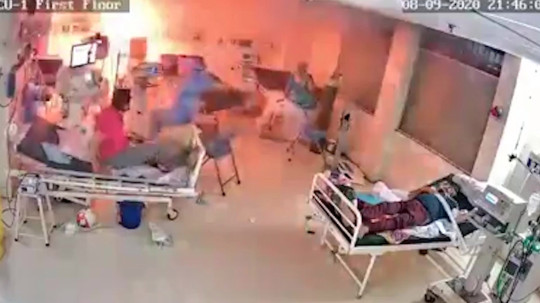 We searched the video on Google and came across news from September 2020 about a fire at Covid Hospital in Wadodara, western India that occurred on September 8 / Printscreen

A video from a surveillance camera in Covid Hospital appeared on the social network TikTok, which shows an explosion of a device, after which a fire spread. The video reads "Pray for Tetovo" and it is spread on social networks in order to show allegedly how the fire in Tetovo occurred.

If you take a good look at the video you will see that the camera says "First floor" which immediately opens room for doubt, because there were no floors in the modular hospital in Tetovo. We searched the video on Google and came across the news from September 2020 about a fire in Covid Hospital in Wadodara, western India that happened on September 8. The fire broke out after a fan malfunction, after which it caught fire.

The victory is ours, and the defeat only theirs!

VIDEO | Tilev: The EC report has good and bad assessments which are directions we need to make

The same snake under the same stone

VIDEO | Skopje is starting to suffocate, the red alarm is on