16:00 A new twist: Bill and Melinda Gates' marriage broke up over…

15:56 Mickoski: We demand a date and negotiations with the EU immediately

15:29 VIDEO: Andonova's super goal against Espanyol and celebrated in…

Do not sit down! Macedonia is under attack by false humanitarians

Macedonia is under attack by fake humanitarians who use fake disease and poverty in the name of fictional characters to gain money illegally. Citizens who have recently discovered such extremely inhumane behavior, which is also a crime, no longer know who to trust and what to believe. Due to the frequent occurrence of false humanitarians, the sense of humanity of those who want to donate is gradually lost, allocating funds from their modest budget.

A certain Radica Dinev has been asking for humanitarian aid on behalf of the poor and sick for a long time. She urges people to donate to her transaction account, assuring them that the money will arrive at the right place. In the appeals for help, she explains that donating to her account is the only way to help because people who need help do not have their own account or receive social assistance, so if they receive an account inflow, it will be canceled. 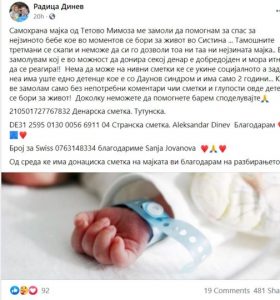 This bait has been "caught" by many people for a long time, until it was recently discovered. Acibadem Sistina also helped in revealing her crime, who publicly announced that the child for whom the money was being collected is not being treated in the hospital.

- The Acibadem Sistina Clinical Hospital informs you that there is no hospitalized baby in the hospital who is allegedly fighting for his life, and whose mother is a certain Mimoza from Tetovo. In the case of social networks, a call for donations is spreading. This is a fake post.
We call on the citizens to be careful and not to succumb to such and similar calls. The announcement in which he calls for help is shared by a certain Radica Dinev, the hospital said in a statement.

Her illegal and inhumane actions are confirmed by a large number of citizens who have donated and are disgusted that someone came up with such an idea, and there are those who are directly affected or deceived.

The Ministry of Interior is aware of such crimes, and they say that they are vigilantly following every step of the fraudsters. They confirm that they have information about other fraudsters against whom criminal charges have already been filed.

The editorial office of "Free Press" is a witness that these are not isolated cases, when a few months ago funds were collected for a sick baby of our colleague. People without any morality created fake profiles on social networks and shared the call for help, which risked a large amount of funds needed to be redirected to a fake account.

Experts say that the best and safest way is to donate to the telephone numbers of mobile operators, because in order to obtain approval for telephone donation, it is necessary to submit medical reports that are sufficient evidence of the condition of the family or the patient.

Georgiadis: I am optimistic that May will be the month of a big return to normal

Mickoski: We demand a date and negotiations with the EU immediately

There are less than 1.000 active cases of Covid-19 in Israel

Today, 135 new cases of Covid-19 have been registered

VIDEO | Menkinoski: The famous note of ANB is not evidence in the procedure against Jordan Kamchev

VIDEO | At least 40 people, including children, were killed in an attack on a school in Afghanistan

A house in Skopje burned down

A new twist: Bill and Melinda Gates' marriage broke up because of the billionaire ...

Mickoski: We demand a date and negotiations with the EU immediately

There are less than 1.000 active cases of Covid-19 in Israel

VIDEO: Andonova's super goal against Espanyol and she celebrated it in style ...

Interview with Vaso Ristov, General Director of the NI National Opera and Ballet: ...

VIDEO: Elon Musk revealed that he suffers from Asperger syndrome, which may be ...

VIDEO: Pandev starter of "Luigi Ferraris", Sassuolo is ahead of Roma!

Today, 135 new cases of Covid-19 have been registered

VIDEO | Menkinoski: The famous note of ANB is not evidence in the procedure against ...

A second-instance commission will consider why a patient who is oxygen dependent with covid ...

VIDEO: A 47-year-old record fell, Westbrook made history in the NBA League!

Maja Velkova, the beautiful face of the city: Maybe I was the only woman with special ...

The controversial legacy of Napoleon Bonaparte

Gjurovska: A reasonable solution for the EU is for Macedonia to progress in European integration

VIDEO: Vasil Garvanliev had a great first rehearsal on the Eurovision stage in Rotterdam

Legal changes for Sunday to be a non-working day, this month at a government session