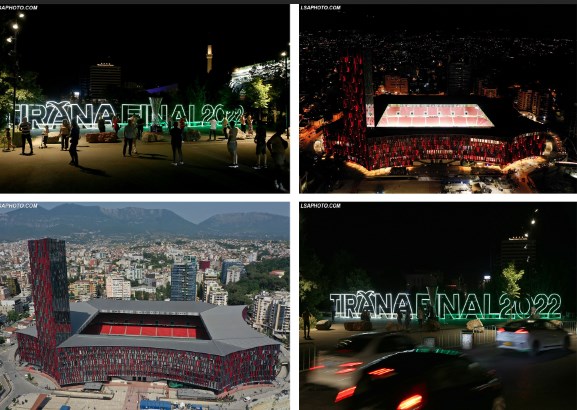 Before today's final of the UEFA Conference League to be played in Tirana, several incidents took place last night in the Albanian capital.

Italian and Dutch fans, grouped in several locations in the city, clashed with police after the violent behavior. Six policemen, two Italian and one Dutch fan were given medical assistance after being hit by glass bottles, stones and batons. 13 fans have been detained by the police.

- In the chaotic situation, the rapid deployment unit had to intervene. About 200 Dutch fans headed to the stadium, which is home to Italian fans. After the intervention of the police, the situation is normalized, Top Channel reported.

Due to the incidents and the possibility for them to escalate, the police issued an order to close all catering and trade facilities before 23 pm.

The Dutch fans, most of them in an alcoholic state, also damaged police vehicles, as well as inventory of catering establishments outside, threw chairs and tables on each other, injuring an Albanian citizen (45) who was left bleeding and unconscious on the street.

Tens of thousands of Italian and Dutch football fans have arrived in Tirana, although each side has been awarded only 4 tickets for the opening final of the third European club competition.

The capacity of the National Arena "Air Albania" is about 20.

UEFA selected Tirana as host in December 2020, a year after the new stadium officially opened and before a team qualified for a debut match.

Roma and Feyenoord will fight for the trophy tonight in the third ranked competition in Europe.

The Albanian government has declared May 25th a national holiday, in honor of Tirana's hosting of the UEFA Conference League final. A special traffic regime has been introduced and security measures have been taken.