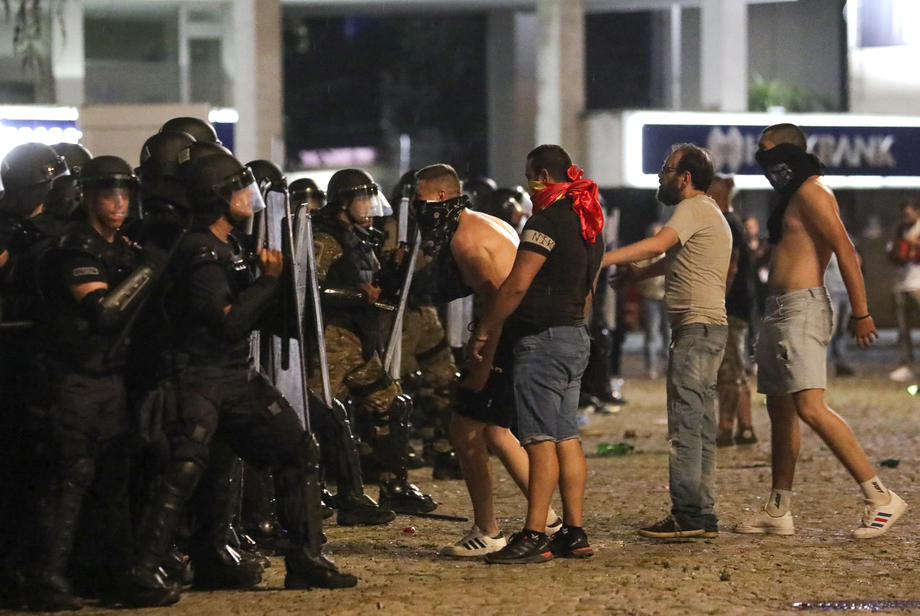 Injured policemen, detained protesters, damaged buildings of state institutions, scattered stones and objects, torn trash cans and becaton tiles is the result of yesterday's protests in front of the Parliament against the "French proposal" to remove the obstacles to the start of Macedonia's negotiations with the European Union.

According to information from the Ministry of the Interior, 47 police officers were injured, 11 of them seriously, and two of them have serious injuries. 11 people from the crowd were detained, two of whom are minors.

- All the injured police officers were given medical assistance, and the more seriously injured were taken to medical facilities for treatment of injuries and medical care, the Ministry of the Interior informed.

During the protest, they added, damage was done to the windows and facades of the buildings of the Government, the Ministry of Foreign Affairs and the Parliament. In addition to this, 16 police shields, several protective police helmets and radio links were broken, and a police house in front of the Parliament and a police vehicle were also damaged.

The incidents were preceded by the protest against the "French proposal" for "preserving identity and language" which started in front of the Government, continued in front of the Ministry of Foreign Affairs and ended in front of the Parliament. A hundred young protesters, including those with hoods on their heads, tore down the fence and started throwing stones at the parliament building, and pyrotechnics, as well as a Molotov cocktail, were thrown at the police.

The police cordon standing right in front of the parliament building pushed the protesters towards the Zhena Borec park, after which several participants of the protests were arrested. At the moment when the protest escalated, a large part of the demonstrators left in front of the Parliament.

Masked protesters have previously tried to cause incidents. They threw stones and pyrotechnics at the police near Skopje's Kale, and then threw stones at the shops in the "Most" department store, chanting anti-Albanian slogans. Some of the protesters also expressed their revolt in front of the Ministry of Foreign Affairs building, where they threw eggs and other objects.

The violence, vandalism and incidents of the protest received condemnations from all sides, and the government and the opposition blamed each other for who the hooded people were.

Prime Minister Dimitar Kovacevski told the protestants: "We will not allow a repeat of April 27."

"What happened last night in front of the Parliament is not the true face of the European Republic of North Macedonia, a NATO member country. Protests are a democratic right of every citizen, but violence cannot be justified by anything. I will say to the arsonists of the protests - do not manipulate and abuse young people to satisfy your political appetites. April 27 will not happen again!", Kovacevski wrote on Facebook.

"This violent way of acting of VMRO-DPMNE and the pro-Russian Left shows their true destructive and violent face. "Protest is a guaranteed right, but violence is a crime and responsibility for this must be borne by all involved," emphasized the ruling party.

The President of the Assembly Talat Xhaferi also condemned the violence of the protests.

"I recognize and support everyone's right to protest, to express an opinion. I constantly and strongly condemn hooliganism, violence, incitement of hatred, because they are not a solution," wrote Xhaferi on Facebook, posting a video of the damage done to the parliament building.

According to the leaders of VMRO-DPMNE and Left, Hristijan Mickoski and Dimitar Apasiev, the violence was instigated by provocateurs thrown in by the government.

- The incidents that happened, and then the brutality that was demonstrated to some of the participants in the protest, are the result of the installations of Spasovski and Kovacevski, which transparently announced the scenario they used. Such a theater where infiltrators sent by the police will break in, and then arrest people, is to defocus attention from the betrayal they are committing, Mickoski said in an interview with Deutsche Welle.

"Last night we did not fall into the trap of the secret police." The thrown provocateurs with hoods from the ANB, who stood in front of the Left's banner, were "read" in time and the leftists distanced themselves from them with a sanitary cordon! We do not fall for those cheap tricks, so that later you have grounds to arrest the entire leadership of the party", Apasiev reacted on Facebook.

Condemnation of the violence and vandalism during the protest against the "French proposal" also came from the European ambassador in the country, David Geer.

"I condemn last night's scenes of violence against the police in Skopje who were performing their duties. Such scenes have no place in a democratic society. I call for restraint, respect and responsibility," Geer said through his Twitter account.

Otherwise, thousands of citizens supported by political parties and civil society organizations have been protesting for several days against the "French proposal" to lift the Bulgarian veto and open the process of negotiations for Macedonia's membership with the EU. The demonstrators believe that this proposal "bulgarizes" Macedonia, does not recognize the Macedonian language and history, and they demand that the Government reject it.

Spasovski: An investigation into an organized structure has been established

The Minister of the Interior, Oliver Spasovski, who visited the injured policemen today, speaking about the causes of the violence, said that it was an organized structure for which an investigation has already been established, led by an operational headquarters, but he did not provide more information in favor of the investigation. He also sent a message to the political parties.

- Protest is a democratic right, but violence and the destruction of the state and the constitutional order must not be organized. Let's not allow violence, attacks on police officers and state institutions to continue, said Spasovski.