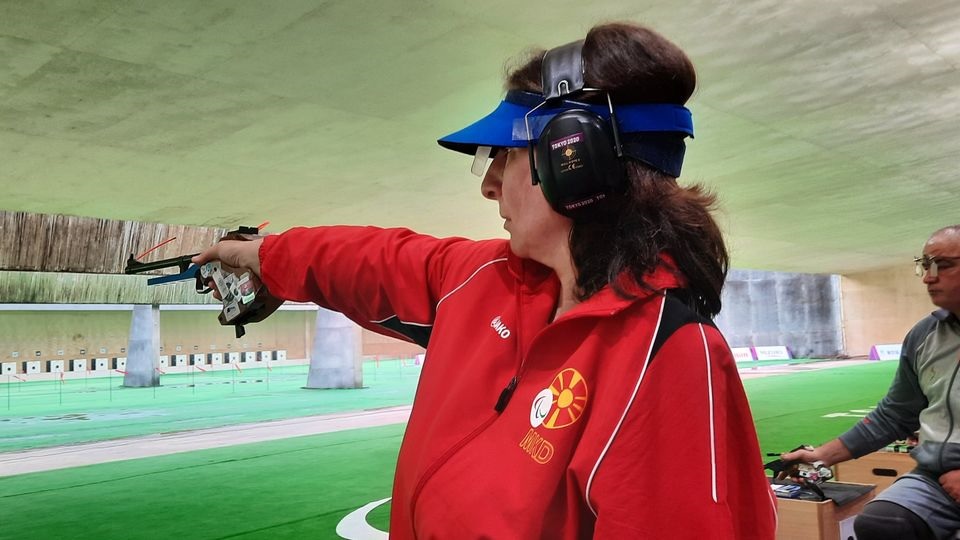 The only Macedonian athlete Olivera Nakovska Bikova had her last third appearance at the Paralympic Games in Tokyo, Japan, which end on Sunday.

Today at the Olympic shooting range in Asaka was held the last pistol discipline P4-Small-caliber pistol free choice of 50 meters. Nakovska Bikova finished the match with 509 rounds and placed 26th.

- We thought it was ammunition, we changed 3 top manufacturers, but the problem remained relevant, the gun did not fire. I immediately took it to the service and we received an answer that they service only air weapons, not small caliber and that they have no parts.

But we had, I was carrying spare parts and we changed the striking needle and the spring ourselves, we went back to the shooting with the hope that we had fixed the problem… and again nothing, the gun did not fire any ammunition.

I went to my colleagues from the Serbian and Bosnian national teams to ask if they had a full stopper with a hammer for the TOZ-35, but the Serbs used another model of pistols (Morini), and the Bosnian who used the TOZ-35 had parts like me that did not. work. Then I addressed the fellow coach of the Russian national team. He told me that they do not have a whole stopper, but they have a master with them who can look at the gun if I want.

Of course I agreed, and after the examination, the master concluded that there is a problem in the pipe, there is flat metal in the part where the grain enters and it does not allow the grain to enter completely into the pipe to ignite. I could not solve it on the spot, but he offered if we want to try to level it with the hope that then it will probably work, maybe not on every shot, but it will still work.

Of course we agreed, the man brought a grinder, it worked for 30 minutes and finally when we assembled the gun… cold shower, the training ended and there was no opportunity to fire a single bullet at the shooting range, to see if it worked.

We packed up, left the shooting range and decided if the test would work during the rehearsal of the match. If it works OK, if not, we will give up the performance. nothing, the ammunition ELEJ TENEX, one of the highest quality, did not work even after a few bullets. We tried another ammunition, LAPUA MIDAS +, and again nothing fired until the third time. And so, 2-3 lifts, one firing.

I asked Olivera if she could endure this physically and mentally, or if we could report a cancellation. She did not even want to hear of giving up and entered the match aware that she would be completely exhausted. If the others fired a match of 60 shots, Olivera raised at least 150 times for the same number of shots. It exhausted her both physically and mentally, but she finished the match with 509 laps and placed 26th.

Congratulations for the persistence of Olivera, but also for the Russian team that unreservedly met us and provided us with full support and assistance - informs Jovanovski.

The Macedonian Paralympic Committee adds that the purchase of new weapons for Olivera for the new cycle for the 2024 Paralympic Games in Paris is imminent. The Macedonian delegation leaves home from Tokyo on 06.09.2021 in the early morning hours and arrives at the airport in Skopje on 07.09.2021 after midnight.

In the previous two performances at the Paralympic Games in Tokyo, Nakovska Bikova won the ninth place in the P3-Sport pistol 25 meters, and in the first performance she was sixth in the P2-air pistol-women 10 meters.

Klopp: This is how the Super League, Newcastle will dominate English and world football for decades

Marko Savovski left Vardar, with the "red and blacks" he conquered handball Europe

The winning team does not change: "Uni Bank" and the fifth year of the MZT jersey