Authorities inspect the fire in Tetovo, Mayor Kasami announced assistance to the victims 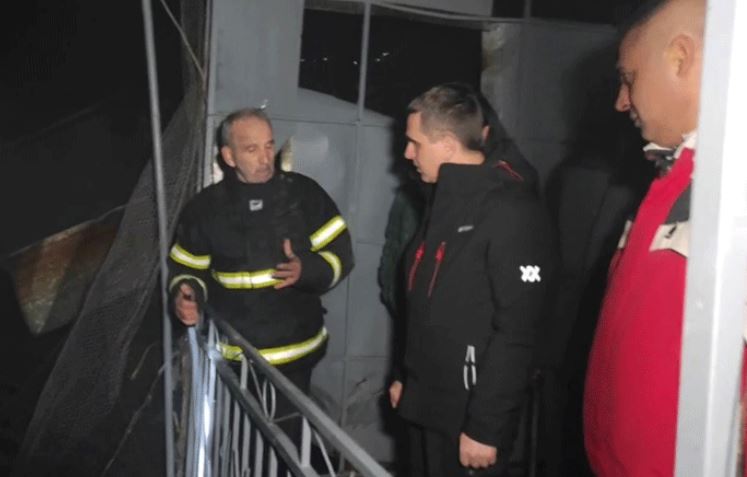 Bilal Kasami at the scene of the fire in Tetovo / Photo: MIA

Municipality of Tetova will help the citizens who suffered damage in the fire in the neighborhood Koltuk, announced the mayor Bilal Kasami who was at the scene last night to see what the situation is after the fire was extinguished.

- Concerned about the fire that engulfed several houses in the Koltuk neighborhood, so I immediately went to the scene to see the situation. Fortunately, no one was injured, and it is only a matter of material damage. I want to thank the Territorial Firefighting Unit that intervened in time and localized the fire without major consequences. We will soon help the citizens who suffered from this fire, said Mayor Kasami.

Police said last night that the owner of the house where the fire broke out, IS (50), received burns.

Some residents of Koltuk after the fire shared what happened yesterday. Thus, Angela Andonovska wrote to the MIA editorial office that the owner of the house was still inside during the fire and was rescued by his neighbor.

- Hero! In the terrible fire that broke out in Tetovo, after disastrous hours spent listening to cries and screams, I publicly want something to stand out. I will talk about courage. For a savior who said, "Either we will go out, or no one!" and save one life. A 25-year-old boy, whose life is yet to come, jumped into the raging fire and saved the man. It is about a person MM who lives in the neighborhood of the person whose house was set on fire. It deserves to be mentioned and praised because while his mother was shouting that he would burn alive, he only thought of the victim, Andonovska pointed out.

SIA Tetovo announced today that during the day the scene of the fire will be inspected to determine the causes. The fire that started last night around 19 pm was completely extinguished at 22:10 pm.