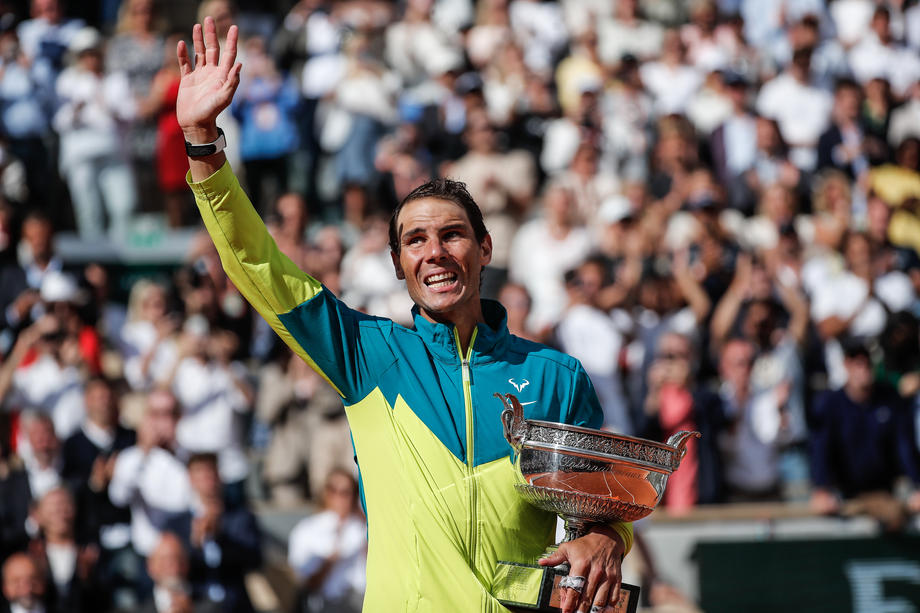 The "King of Roland Garros", Rafael Nadal, will probably have to undergo a new medical treatment on his foot in order to continue his career and postpone his early retirement.

Nadal lifted the Roland Garros championship trophy for the 14th time yesterday, again demonstrating why he bears the epithet "King of Roland Garros".

Nadal lost only three sets on the way to the title, two by Felix Oze-Aliasim and one by Novak Djokovic, although he played the entire Grand Slam tournament under injections. The Spaniard admitted that he played most of the matches with an "anesthetized leg" so as not to feel the pain.

- I hope that I will continue to play because at the moment I am in a wonderful situation, which is unexpected for this part of my career. Still, life is more important than titles. My career has been a priority all my life, but it must not be above my happiness. "I will be happy if I continue with my career, and if not, I will do something else," said Nadal.

The Spaniard also hinted that a new break from the tennis courts would follow, due to which he would miss Wimbledon. He told Spanish journalists that he had been receiving injections throughout the Grand Slam to reduce foot pain.

- The injections I received in the nerves went well, and now we will do a treatment that will focus on two nerves. That's something I've already done. These therapies are done with radiofrequency which will help me reduce the pain in my foot. We will see if the new therapy can leave the nerve half dead forever. It would leave me with almost no feeling in my foot. The only way to perform at Roland Garros was to "anesthetize my leg". "We blocked the nerve with anesthesia and I have not felt anything for the past two weeks," Nadal explained.

The Spaniard then explained to reporters what medical treatment, ie therapy, looks like.
The Madrid Pain Treatment Clinic said pulsating radiofrequency was "a treatment for pain caused by irritation or a defect in the nerves or sensitivity of the body that transmits pain to the body," Nadal quoted Nadal as saying.

The treatment is performed "in a room with light sedation by a specialized anesthesiologist". Treatment consists of "inserting a special needle with an X-ray or ultrasound until it reaches the nerve that needs treatment." The tip of the needle is then charged with "pulsed radiofrequency to reset the function of the injured or damaged nerve."

- The control of the feet was less, but what is asleep is that sensitive nerve, not the motor nerve, so I had practically complete control of the foot. But I can not continue to compete with a stiff foot. We have to find a solution because I would like to continue competing. That's why next week I will consult with several doctors to explore all the options - says Nadal.